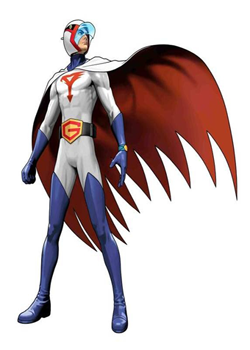 Ken Washio aka Ken the Eagle (known in Japan as Owashi no Ken) is the 18 year old leader of the Science Ninja Team, a team of young superheores who fights against Galactor, a technologically advanced terrorist organization. Raised by Dr. Nambu Ken's calm and collected nature contrasts with that of his hot-headed second-in-command, Joe. In his civilian life, Ken lives on a small airfield, working as a test pilot. The plane he flies can transform into the G1 a supersonic jet used for combat. Ken's trademark weapon is the Birdrang, a razor edged bird shaped boomerang. Ken has also sought out information about his father which, at times, has put him at odds with his team and superiors. These issues aside, Ken is a stoic, law-abiding leader who lets nothing distract him from his duties not even girls who are obviously attracted to him (namely Jun).