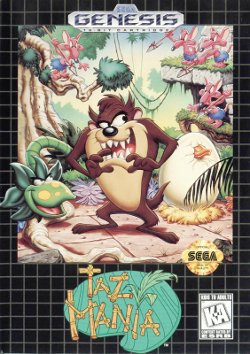 Taz Mania is an video game developed and manufactured by Sega for the Master System and Mega Drive/Genesis in 1992. It is based off the cartoon Taz-Mania, as are the other versions of the game that were made for the SNES and Game Boy.

The plot for the game is a twist on the usual "Save the world" stereotype for many platform games. One evening, Taz's father is telling an intriguing tale. Somewhere on Tazmania is a Lost Valley, and in that valley nests a huge seabird, so huge that one of its eggs could feed a family for a year. Taz becomes fascinated by the prospect of the potentially large omelet and leaves in search of one of those eggs. However in his haste he leaves before his Dad has finished the story and thus does not know exactly where to go. The player must direct Taz through 5 stages in search of the Lost Valley and its Giant Bird.