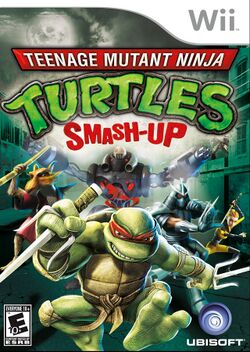 Teenage Mutant Ninja Turtles: Smash-Up is a new Teenage Mutant Ninja Turtles fighting game, for the Wii and PlayStation 2. It was developed by Game Arts, who had previously worked on Super Smash Bros. Brawl, and members of Team Ninja, who previously worked on Ninja Gaiden II. The full title of TMNT Smash-Up was announced on January 23, 2009. The game is not be specifically tied to any previous Turtles license, yet bears the same artistic style as the 2007 CGI movie, TMNT.

The story of the game was written by TMNT co-creator Peter Laird. Mirage Studios made character selections for the game, and the roster includes characters "you know well in addition to surprise characters you certainly wouldn't expect."

The game is a 4-player fighting game and the third TMNT fighting video game. It will be a 2.5D platformer-inspired game, similar to Super Smash Bros. It features life bars, although characters can be KO'd by falling off the stage. The game stresses interaction with the environment, and stages in the game feature traps, changes to the stage itself, and interactive elements. Like the Smash Bros. series, the game also features items including life-restoring pizza and "ninja magic" that grants players special abilities like fire breathing. Characters are color-coded on-screen via a glow effect to help players keep track of their characters.

Out of the Shadows · Mutants in Manhattan