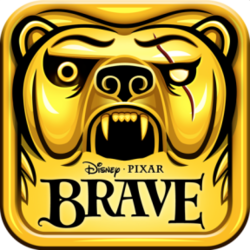 In June 2012, it was announced that Imangi Studios had tied up with Disney to promote the movie Brave with a game titled Temple Run: Brave that released on June 14 for the iOS and on June 25 for Android. Unlike the original free game, it costs 99 cents to purchase.

Temple Run: Brave is set in the forests and wild of Scotland, with the default and only character, Merida. Like the original Temple Run game, Temple Run: Brave has its own store, but different. In the Store one can buy the same boosts in the original Temple Run, and the player can upgrade them afterward, like Invisibility, Mega Coins, Coin Magnet, Double Value, and other utilities. The player can also buy gowns, dresses and armor for Merida to wear during the run, or some new wallpapers. As the original game, Temple Run: Brave's objective is to keep on running and avoiding the dangers along the way for the longest time, while being chased by a wild animal.

The all new feature for Temple Run: Brave is archery. Along the way on one's run, an archery symbol will appear and some dots above it, acting as a signal that there will be bullseyes to shoot at. The dots are the number of targets in this area. On the left and right hand sides, the player will then find archery targets; by just touching the screen, an arrow will be shot accurately on the upcoming target. When the player finishes hitting all targets in the area, they will take a coin bonus, and will have to wait for another area with archery targets.

The game was released on Windows 8 in 2013. The following guide below was made using Windows 8, but should apply for all versions.

Magic arrows upgrade
Except from the regular 200 to 300 coin bonus by hitting all the targets, this upgrade will also give you coins for every target hit.

After you die you will get to play a mini-game. If you collected the 'bow & arrow' item during the run you will get a free arrow for each of these item you collected. In the mini-game by shooting an arrow at a target you will get either nothing, a score bonus, score multiplier or an item that will be activated your next run.

Bonuses you can get from the targets: