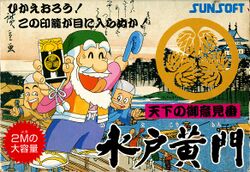 Tenka no Goikenban: Mito Koumon (水戸黄門 天下の御意見番, Tenka no Goikenban: Mito Koumon? lit. Mito Koumon's Investigation Around Japan) is an adventure game developed and published by Sunsoft for the Famicom in 1987. It revolves around the historical Japanese figure Mito Koumon who, as a retired governor, traveled across Japan to observe other districts. Where ever he investigated, he found local inhabitants who were experiencing some problem, or observing some corruption in the local government. Mito Koumon would then investigate the situation, disguised as a commoner, only to expose both the corruption and his true identity when the mystery was completely solved. In doing so, he would improve the lives of the local inhabitants, and then move on to another district to look for more problems. The game was only released in Japan, and never translated into English. It had one sequel: Mito Koumon II: Sekai Manyuuki.