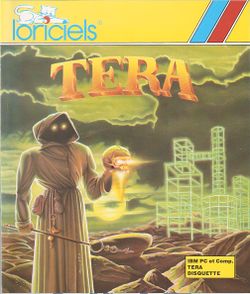 Tera: la cité des crânes (Tera: The City of Skulls; in French, titles are always sentence case) is a role-playing game released in 1986 in France only. The developers used the pseudonyms "Ulysses" and "Lout". The game was published by Loriciels.

Tera is one of the earliest French-only role-playing games. One year later, Ulysses developed Karma, a spiritual sequel to Tera that uses the same engine.

Anyway, Wizardry, The Bard's Tale, and the early Ultima titles show a clear influence from the pen-and-paper Dungeons & Dragons, but no element of the latter is present in Tera. Therefore, it is likely that all similarities are just coincidences, especially for the games released just one year earlier, in 1985.

Few games use a skill system in any way reminiscent of Tera 's one, where characters learn from each other. Perhaps, the most similar is Final Fantasy V, where characters can change job and keep one earlier skill.