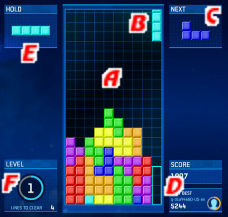 Tetris is played on a 10 by 20 grid referred to as the Well, or the Matrix. Shapes called Tetriminos fall from the top of the Matrix and come to rest at the bottom. Only one Tetrimino falls at a time. At first the Tetriminos fall rather slowly; as the game progresses, they will fall faster and faster.

There are seven different Tetriminos that can appear throughout the course of the game. These seven pieces represent all of the various ways that you can arrange four contiguous squares. All of these pieces are covered in depth on the Pieces page. A good understanding of the seven different shapes is required in order to achieve high scores and long periods of play. In general, the seven pieces are referred to by the letters they most closely resemble: I, O, T, S, Z, J and L.

The simplest goal of any Tetris game is to clear a line from the screen. This is accomplished whenever Tetriminos are arranged so that they fill a horizontal row within the Matrix. As the pieces fall, your goal is to move and spin them so that they line up evenly at the bottom of the Matrix. To clear a line, every square of the row has to be filled.

In general, the more lines that you clear simultaneously, the more points you will obtain for the accomplishment. Clearing one line at a time produces the least amount of points. Clearing two or three lines with a single piece earns the player a considerably higher score. The most lines a player can clear with a single piece is four, by placing the I piece vertically. This is known as getting a Tetris.

In more advanced and recent versions of Tetris, a Ghost piece indicator is displayed to show you where your current piece would land if that piece were to drop to the bottom without any intervention. This can be useful when trying to anticipate where a piece will drop when it is still relatively high in the Matrix. The Ghost piece indicator does not indicate all of the places where a piece is permitted to go; you may decide to slide a piece over after it lands.

Like the Ghost piece, the Hold piece is a more recent feature of Tetris. It allows players to set aside a piece and to use it later on. When a Tetrimino is taken out of play, and placed in the Hold box, the following piece immediately appears at the top of the screen. Once a piece is held in the Hold box, releasing it will swap that piece with the current piece which was falling. Typically, you may only swap a piece once, and once it has been swapped, you must place it on the stack before you have the ability to swap another piece with the piece in the Hold box. The Hold box can be an incredibly powerful tool. See the Advanced strategies page for more information.

In a majority of Tetris games, your progress is indicated by a level. The speed at which each Tetrimino falls is dictated by the level. You may start your game off on level 1, which will feature pieces that fall at the slowest speed possible. Whenever you reach the next level (traditionally accomplished every time you clear 10 lines from the Matrix), the speed at which the pieces fall will increase slightly. Many variations of Tetris allow you to select the level (and therefore the speed) that you would like to begin your game at.