Like many aspects of Tetris, something like the rotation of pieces may at first appear very simple and straightforward, but in practice it is very nuanced. Although all versions of Tetris allow you to rotate pieces 90 degrees, and most versions allow you to rotate them clockwise or counter-clockwise, not every version of Tetris rotates pieces quite the same way. Read more below for a better understanding. 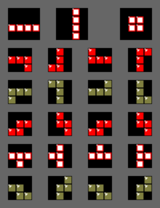 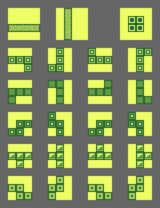 The rotation system employed by the Game Boy version of Tetris is nearly identical to the one found in the NES version (described above) with one exception: The S and Z pieces favor the left side of their rotation space. For this reason, this rotation system is referred to as the left-handed rotation system.

The original rotation system found in a majority of the early console and computer releases of the game is identical to the Nintendo (right handed) rotation system described above, with one single exception: the I piece, when rotated horizontally, is one row of squares higher. 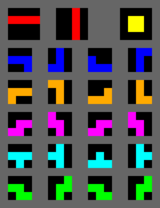 Sega rotation is a rotation system that has been used by Sega's arcade version of Tetris and its successors. Each tetromino is ordinarily spawned flat side up. The ceiling prevents rotation.

The differences between Sega rotation and Nintendo Rotation System are that the flat-side-down states of J, L, and T are pushed down by one space, that S and Z round in different directions, that I rounds differently from the other pieces, and that I requires more space under it to rotate to a vertical orientation.

Sega rotation originally used no wall kicks. Arika took Sega rotation, added mild wall kicks and initial rotation, and ended up with TGM (Tetris: The Grand Master) Rotation, or Arika Rotation System. This rotation system is a game play mechanic used in Tetris: The Grand Master and other Arika tetromino games, derived from Sega rotation. It is often refered to as ARS (Arika Rotation System), even though some people believe that this name is misleading. Games using TGM rotation generally use IRS, fast DAS, lock delay, and firm drop, and tetrominoes start out with the topmost block on the top row (generally row 20). The "ARS" and "ARS2" modes of Tetris The Grand Master Ace use a hybrid of TGM rules and Guideline rules. In addition to the TGM series, most arcade games developed in Japan before the guideline followed the Sega rotation rules with varying degrees of wall kicks, such as Flash Point, Bloxeed, Sega Tetris, and the Tetris Plus series. 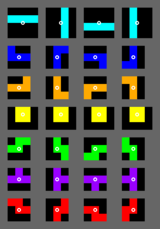 Super Rotation System, or SRS, is the current Tetris Guideline standard for how tetrominoes behave, defining where and how the tetrominoes spawn, how they rotate, and what wall kicks they may perform. Henk Rogers developed this system in order to unify all new Tetris games under the Tetris Guideline.

The basic rotation states are shown in the diagram on the right. Some points to note:

Wall kicks are not available in most early versions of Tetris. Wall kicks were introduced in the 1998 arcade game Tetris: The Grand Master (or TGM). They were formally adopted into the SRS in the 2001 game Tetris Worlds. They were introduced to address the issue of being unable to rotate a piece that was backed up against the wall until the piece was moved away.

A wall kick happens when a player rotates a piece when no space exists in the squares where that tetromino would normally be after the rotation. To compensate, the game sets a certain number of alternative spaces for the tetromino to look.

The simplest wall kick algorithm, used (with variations) by TGM rotation and several fan games in the same tradition, is to try moving the tetromino one space to the right, and then one space to the left, and fail if neither can be done. Wall kicks increase the number of possible twists, ways to rotate a piece into seemingly blocked positions.