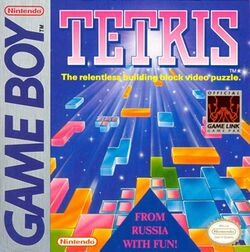 Tetris (Russian: Те́трис, pronounced [ˈtɛtrʲɪs]) is a Russian tile-matching puzzle game, originally designed and programmed by Alexey Pajitnov. The Game Boy version was developed and published by Nintendo, who purchased the license from Elorg, through the help of Henk Rogers of Bullet-Proof Software.

A-Type
A missile launch is shown when the player surpasses a certain score.

B-Type
A screen with Russian musicians and dancers is shown when completing 25 lines on level 9. The number of dancers increase with the initial height level. When completing level 9 at height 5, a shuttle* launch is shown immediately following the end of the song that the dancers are dancing to.

* Contrary to popular belief, it is not the United States Space Shuttle which lifts off in the best ending, but rather the Buran, Russia's equivalent of the Space Shuttle.

Multiplayer features only two players, and pits Mario against Luigi as they stack Tetriminos on separate fields. Each player plays with a separate Game Boy and Tetris Game Pak, with the two consoles connected via the Game Link Cable. Before starting each player can configure their starting height.

When a player scores a Double, Triple, or Tetris, incomplete rows of blocks are added to the bottom of the opponent's stack, causing it to rise. Garbage is single aligned hole (same for both players) and based on a system that sends 1 line on a double, 2 lines on a triple and 4 lines on a Tetris.

Both players have the same piece sequence, same starting garbage and same garbage hole. While neither player can see the opponent's playfield, a column on the left side of the screen indicates the height of the highest piece in the opponent's well. While this doesn't indicate that a piece at the top indicates defeat, it does give each player a general sense of how they are doing by comparison.

Play continues until either one player runs out of space or one player clears at least thirty lines, at which point Mario and Luigi are seen celebrating or moping. The games then begin anew, with a cleared screen. First to 4 rounds wins the match.

The rotation system is a left-handed Nintendo Rotation System. Lock delay, wall kick, and hard drop are not present.

It was intended that the randomizer reduces the chances of getting one and the same piece shape 3 times in a row. However, the randomizer works differently in practice. Pieces are numerated from 0 to 6, repectively from 000 to 110 in binary notation. The code uses a bitwise OR operation. This is an operation that takes 2 binary numbers to compute a new binary number. The result has a 1 at a certain digit if at least one of the 2 arguments has a 1 at the same digit. For example 1100 OR 1010 = 1110. The following happens:

Version 1.0 was only released in Japan as part of a Special Link Bundle, and is estimated to have sold around 25,000 copies. Version 1.1, used for the rest of the Japanese print run and released internationally, contains the more widely-recognized A-TYPE music and is overall a slightly more polished game.

Because of the later 2 points, it's easier to get a higher score in this specific version. It's theoretically possible to score 999,999 points before reaching level 20.