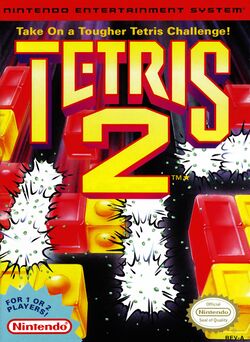 Tetris 2, released as Tetris Flash in Japan, is an official variant of the Tetris puzzle games, released in 1993 for the NES and Game Boy, and in 1994 for the SNES. Tetris 2 uses disconnected colored tetrominoes instead of adjacent type tetrominoes. It is the first Tetris to make use of the gravity algorithm. Blocks of the same color stick together. The goal of Tetris 2 is to clear the bottom rows; a similar type of play can be found in the later released The Next Tetris.