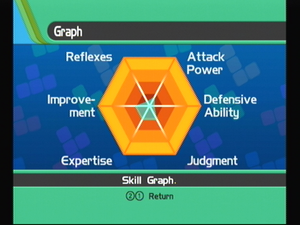 The Skill Graph fills up as you reach certain milestones.

The Skill Graph is a radar graph with six values that increase based on statistics collected by the game, similar to achievements. From the main menu, the Skill Graph can be reached by going to Records, Personal Records, and then Graph.

The values on this graph accumulate as you play the game. Playing rounds of any game mode will contribute to the Skill Graph, except rounds that are not eligible for high scores (due to starting at a higher level than the default, for example) or those that end because of retrying or quitting.

Expertise increases as you play more rounds of any game mode.

Judgment improves when you finish a round with less than a certain number of rotations performed (how many?) in that round. The value on the graph is initially 0% and will increase by 1% whenever this condition is met. Thus, it takes 100 games played like this to max out Judgment.

One way to quickly increase Judgment is to game over as fast as you can.

Reflexes improve by clearing lines in the top six rows of the Matrix.