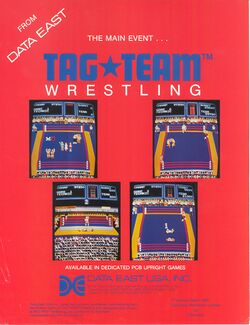 In the NES version, two professional wrestling tag-teams, the Strong Bads and the Ricky Fighters, battle against each other in tag-team action, or a single player competes in a series of tournaments to win ever larger trophies. The Strong Bads provided the basis for the character Strong Bad on the popular Homestar Runner website.

As an 8-bit game, Tag Team Wrestling has a limited number of wrestling moves and characters. Moves and counters are performed through the use of a real-time, menu-based action-reaction fighting module. After engaging in a grapple, players quickly scroll through a menu and choose a technique to perform. Each of the four characters has a unique move that can only be used against one other "rival" wrestler.