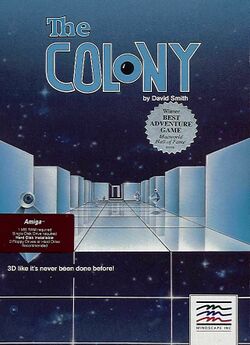 The Colony is a first-person shooter developed by David Alan Smith. It was published by Mindscape. The 1988 Macintosh release came in two versions, one in color and one with black-and-white graphics. The DOS version, released the same year, was available in black-and-white only. The 1990 Amiga version was in color.