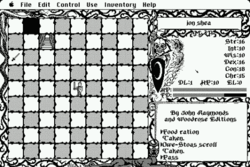 The player controls a single character trapped in an underground dungeon. If the character attempts to take the stairs from the dungeon, a message appears: "A force prevents you from escaping to the surface. Maybe the Orb will set you free..."

The dungeon is divided into 40 floors, each with one staircase going up, and one going down. The floor plan of each level is randomly generated, but remains unchanged throughout a single game. Though each level is about the same size, the complexity of the floor plans becomes more maze-like as the character descends to deeper dungeon levels. There are also items, including weapons, armor, magical rings, scrolls, potions, wands, food items, and jewels placed randomly throughout the dungeon's floors.

Progress though the dungeon is hindered by monsters who, depending on the circumstances, have varying levels of hostility towards the character. The character must also eat periodically to avoid starvation. The monsters become more powerful and resistant to attack as the player progresses deeper into the dungeon.