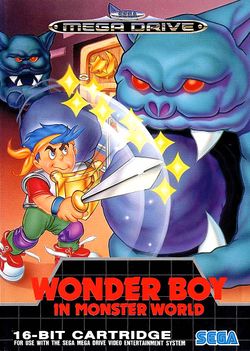 Like the other games in the series, the game combines standard platform game elements—walking, jumping, and killing enemies—with action-adventure elements—collecting weapons, items and magic, talking to NPCs, and exploring a free-roam game world.

Shion travels through the many interconnected regions of Monster World, all the while collecting increasingly powerful equipment in the form of many different swords, spears, shields, suits of armour, and boots.

The game introduced a one-slot save feature to save process at inns throughout the game world. Returning to an inn was easily accomplished by deliberately dying and then being teleported to the inn with no penalty other than the inn's usual fee. For the English version the game was made much harder; dying to save no longer worked (death instead led to a Game Over screen) so the player instead had to either trek to the nearest inn or else use the Return magic, and harder forms or more traps were added to boss battles to make them more difficult.

A significantly different version was produced for Sega's ageing Master System. It features sloppy hit detection, fewer stages, and is generally considered to be an inferior version. This guide does not currently cover the Master System version directly, so some stages will be shorter than described here (or missing altogether) when playing that version.

Although Sega owned the rights to the Wonder Boy characters' likenesses, Westone owned the game itself. They licensed it to Hudson Soft, who produced The Dynastic Hero. There were some changes to the game world (for example the dragon village is instead a bee village), and all bosses were changed (some even have different move patterns), but the gameplay is largely identical. Because it is based off the Japanese Mega Drive version the game is much easier than any other western version. The music has also been completely replaced; while the new music is CD-quality, some players prefer the original compositions. The US version is the single rarest Turbo Duo game in existence, making it highly sought after by both Wonder Boy fans and collectors in general.

Like other games in the series, Sega's Brazilian distributor Tec Toy released an altered version called Turma da Mônica na Terra Dos Monstros where Shion and various other characters were replaced with characters from Monica's Gang.