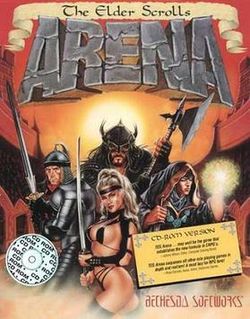 The Elder Scrolls: Arena is an epic fantasy open world action-adventure RPG developed and published by Bethesda Softworks for MS-DOS in 1994. It is the first game in The Elder Scrolls series. In 2004, a downloadable version of the game was made available free of charge as part of the 10th anniversary of the series. Like its sequels, Arena takes place on the continent of Tamriel, complete with wilderness, dungeons, and a spell creation system that allows players to mix various spell effects.

The imperial battlemage Jagar Tharn betrays the Emperor Uriel Septim by imprisoning him in an alternate dimension, then assuming the Emperor’s identity and place on the throne. A lone prisoner must travel to Tamriel’s most famous and dangerous sites to collect the shattered Staff of Chaos, save the Emperor and free the Empire."

For centuries different factions battled in petty wars and border conflicts, until in 2E 896 Tiber Septim crushed all those who opposed him and took control, proclaiming himself as Emperor. Still, the bitter years of war had its affect on the populace. The name Tamriel, Elvish for 'Dawn's Beauty', seldom fell from anguished lips and was soon forgotten. In a place where life and death were different sides of the same coin tossed every day, the people of the known world began calling the land of their sorrow, the Arena...

Now, 492 years after Tiber Septim took control and kept the peace, the land of Arena has a new threat. The Emperor, Uriel Septim VII celebrates his forty-third birthday. But jealous hearts desire the throne and plot his downfall.

It is said that hope flies on death's wings. Prepare then, for as the Elder Scrolls foretold, it will be here that your adventure begins...