The Empire Strikes Back

From StrategyWiki, the video game walkthrough and strategy guide wiki
Jump to navigation Jump to search
The Empire Strikes Back | Table of Contents | Gameplay | Walkthrough 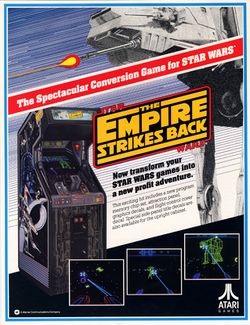 The first level sees the player guiding Luke Skywalker over the ice planet of Hoth on a SnowSpeeder while destroying the Empire's Probots; however, the second level sees him against the Empire's AT-AT Imperial Walkers and AT-ST Scout Walkers (the SnowSpeeder will also have a limited amount of harpoons on this level which can be fired off at the Imperial Walkers' legs to destroy them). The third level will see control switched to Han Solo in the Millennium Falcon in a repeat of the original game's TIE Fighter sequence - and the fourth and final level sees him piloting it through an asteroid field. By destroying a certain amount of enemies, the player will receive bonus points and a letter will light up in the word JEDI; once all four are lit, the player shall become invulnerable for a short period of time.