From StrategyWiki, the video game walkthrough and strategy guide wiki
< The Fairyland Story
Jump to navigation Jump to search 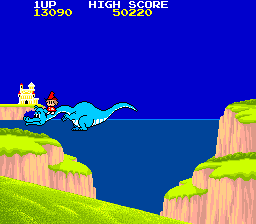 Taito Corporation's 1985 platform arcade game The Fairyland Story is divided into 101 rounds (the last one is a boss fight against Dracolisk); at the start of each round, Ptolemy shall fly into view from the right side of the screen on a broomstick, then get off it as the various enemies for that particular round appear in their respective starting positions and the text "READY!" appears in the centre of the screen. The broomstick will then fly away as the enemies start moving, and you will have to use the 2-way joystick to make Ptolemy walk left and right, and the two buttons to make her cast spells at the enemies to transform them into cakes and jump - and once she transforms an enemy into a cake, she will either have to push it off the edge of a platform, or cast a few more spells at it to kill it before it reverts to its original form. If Ptolemy should touch an enemy (unless she lands on its head) it will cause a bubble to appear around her and she shall fly away off the top of the screen, costing her a life; she will also have to start the round again when she returns to it, but after a preset amount of time on each round (which varies from one to another), the sun shall appear in the sky and instantly transform all remaining enemies into cakes (which shall leave bronze, silver or gold coins behind when killed, but you'll have to be quick if you want to earn these, as they'll still revert to their original forms if you take too long over killing them). A randomly-generated powerup will also appear in a preset position once per round - and once Ptolemy has killed everything on the current round (except for Worms if present, as they're indestructible), she will proceed to the next round.