The Godfather: The Game/Special Delivery 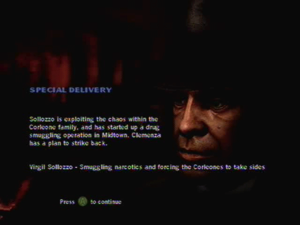 Sollozzo is exploiting the chaos within the Corleone Family, and has started up a drug smuggling operation in Midtown. Clemenza has a plan to strike back. 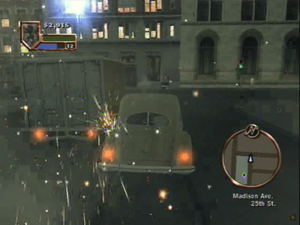 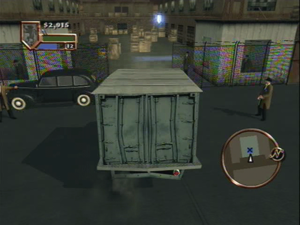 The Tattaglias are in for a surprise

The first thing you need to do is to hijack a racket truck. Steal a car, then go to the blue X on your map. It represents the closest racket truck. Taking over a truck during this mission is a bit more difficult than normal. Keep ramming the truck with your car, or if you can, get out and fire a weapon at it. After it takes enough damage, it will finally stop and the driver will get out. Beat him down until he's ready to listen, then interrogate him to get his keys. Get in the truck and drive it to Corcoran's Perch. After the cutscene, drive back to the warehouse and pull into the blue spot. They'll open the gates for you. Then drive through the gates and into the next blue spot. 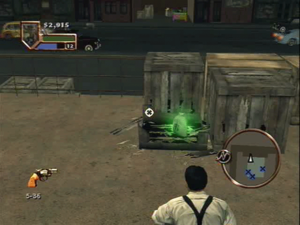 Break this crate to collect the bonus moneybag 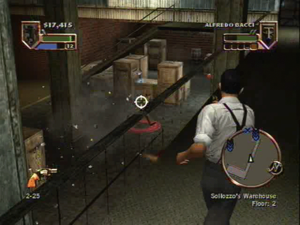 Shoot down at your enemies as you run across

After getting out of the truck, go up the stairs of the building on the right. Don't worry about the enemies on the ground, Clemenza and the crew can take care of them. When you go up the stairs, turn to the right and break the crate there to reveal the hidden bonus moneybag. Collect it, then go into the door. There will be about four Tattaglias below you. Go to the left and take cover behind the box with the Molotov on it. Take out as many enemies as you can from there, then head to the other side of the building, shooting down at anyone remaining. 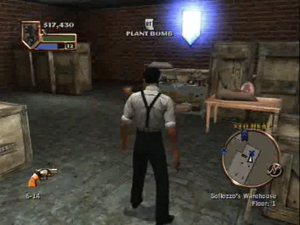 Plant the bomb close to the stairs for a quick escape 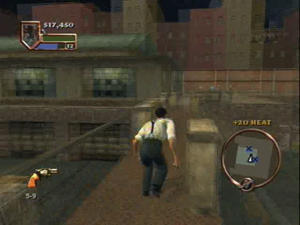 After bombing the first building cross over to the next

Go down the stairs, plant the bomb as close as you can to them, then run back up them and out the door on that side. Cross over to the other building now, taking out any enemies along the way. 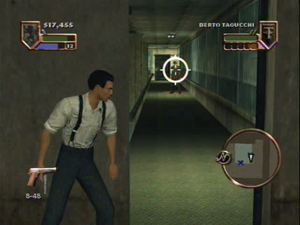 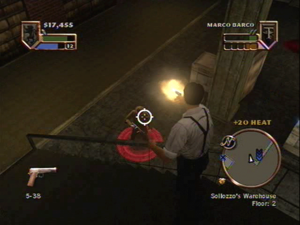 Take cover to the left of the door, open it, and take out the Tattaglia standing across from you, and one below you. Then go inside and down the stairs, firing at anyone below. 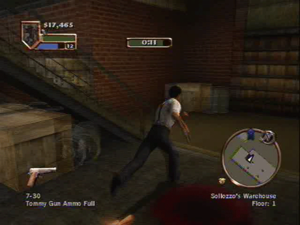 Plant the second bomb and get out of there 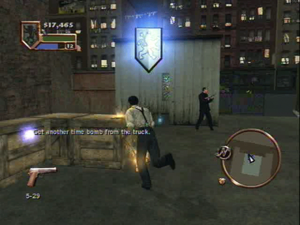 You'll have to get more bombs from the truck

Then take cover, and take out anyone remaining. Plant the bomb as close to the stairs as you can, then run back up them and out of the building. You will now have to get more bombs from the truck. Go down the stairs and to the left side of the truck to collect the bombs. 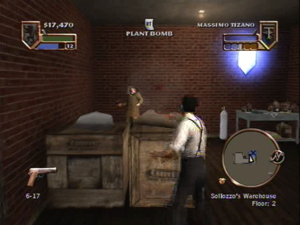 Kill this guy, then plant the final bomb 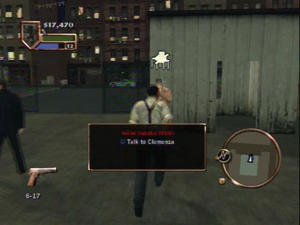 Talk to Clemenza to finish the mission

Now go to the left side of the last remaining building. Take cover by the door, open it, and take out anyone inside. Then go through the door and take cover behind the boxes to the right. Take out the guy in the room across the way. Then go up the stairs and to the left and take out the guy in that room. If you need health, there is a health bottle in the room on the other side of the stairs. Otherwise, plant the bomb, run down the stairs and out of the building. Now go talk to Clemenza. This will complete the mission.

Go to Corcoran's Perch and talk to Monk. He'll tell you to go see Tom at the Compound. Go to the Compound and go in the front door. Walk over to Tom. This will start the next mission.

[Go to top]← Death to the Traitor | Special Delivery | Horseplay →