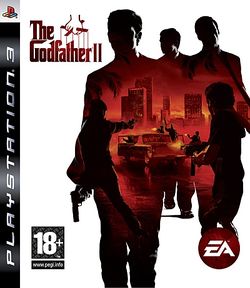 The Godfather II is a 2009 video game based on The Godfather Part II, a 1974 crime drama film directed by Francis Ford Coppola and co-written by Coppola and Mario Puzo. The game is published by Electronic Arts and was released on the PlayStation 3, Xbox 360 and Microsoft Windows. This is also a sequel to The Godfather: The Game, which was also developed and published by EA in 2006. The game was released on April 7, 2009 in North America, April 9 in Europe and April 5 in Australia. The Godfather II is played from a third person perspective. It also contains some strategy aspects, as the player's character battles rival families and takes over businesses to ultimately become a "Don" ruling over many cities.

The Godfather II takes place in the late 1950s and early 1960s over three cities: Havana, Cuba, New York City, and Miami, Florida. Michael Corleone orders the player character, Dominic, to take charge of the family after the death of his New York Don Aldo Trapani, the protagonist and player character of The Godfather: The Game. Now as Dominic, the player leads the family to defeat other, international families and take control of various businesses and crime rings, in order to become the most powerful Don in America.