The Great Ace Attorney 2: Resolve/Episode 1: The Adventure of the Blossoming Attorney 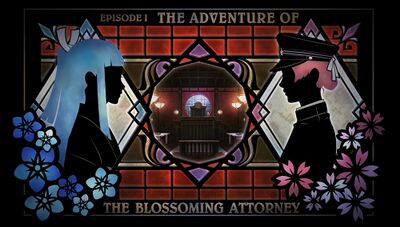 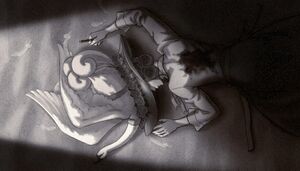 A judicial assistant who has chosen to disguise herself as a lawyer in order to defend her best friend, Rei Membami, in court. Her alter-ego in this case is Ryutaro Naruhodo, cousin of Ryunosuke Naruhodo.

A student of forensics at Imperial Yumei University, she is the best friend of Susato and an assistant to her father, Yujin Mikotoba. She happened to be at the isolated beach on the same day as the victim, and is therefore considered the sole suspect.

A British student, previously found to be the culprit behind the murder of John H. Wilson. She was soon to be sent to Shanghai in order to be judged by a British court, but her final wish while in Japan was to visit a beach. It was there that she met her end.

The prosecutor in this case, Auchi previously faced defeat at the hands of Ryunosuke Naruhodo when the latter was found to have been framed by Jezaille Brett. He now seeks redemption against Ryunosuke's "cousin."

An inspector of the Japanese police force, Hosonoga was at the scene in order to keep guard over Jezaille Brett.

A man previously defended in court by Ryunosuke Naruhodo, now a witness to murder. He seems to have accomplished his goal of becoming a writer.

The father of Susato Mikotoba and a professor at Imperial Yumei University. He assists his daughter in this case in order to ensure that his assistant, Rei Membami, avoids punishment for a crime she didn't commit.

A reporter who has been following Soseki Natsume around ever since he obtained fame as a writer.

Go to top
← Walkthrough | Episode 1: The Adventure of the Blossoming Attorney | Trial, Part 1 →

Gameplay
Appendices
Walkthrough
The Adventure of the Blossoming Attorney
The Memoirs of the Clouded Kokoro
The Return of the Great Departed Soul
Twisted Karma and His Last Bow
The Resolve of Ryunosuke Naruhodo
Retrieved from "https://strategywiki.org/w/index.php?title=The_Great_Ace_Attorney_2:_Resolve/Episode_1:_The_Adventure_of_the_Blossoming_Attorney&oldid=913245"
Hidden category: