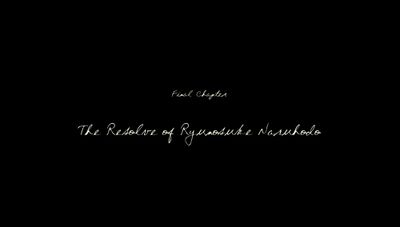 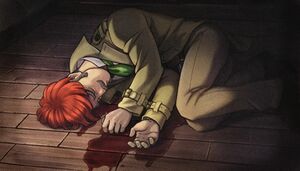 A defense attorney that Barok van Zieks has expressed respect for despite his bias against the Japanese. Ryunosuke continues to defend his client in court in order to prove his innocence.

A prosecutor who now finds himself the suspect of murder. Van Zieks was found alone with the victim, but he denies any involvement in the crime.

A Scotland Yard detective who was found murdered in a rundown house. He was admired by the officers below him for his work on the job, but is now believed to have been hiding some dark secrets.

The prosecutor in this case, Kazuma is the best friend of Ryunosuke, thought to have been killed on the SS Burya. He has now recovered from his amnesia and seeks to prosecute the man who prosecuted his father.

The Lord Chief Justice of London, Stronghart has greater ambitions that have been unintentionally hampered by Ryunosuke's investigations. He now takes the role of judge in this trial in order to speed it up.

A former pickpocket, Gina has turned her life around by becoming an apprentice to Inspector Gregson. Now faced with Gregson's murder, Gina's set on getting the man responsible convicted.

A man discovered to have been the chief warder at Barclay Prison ten years ago. He was dismissed from his position when Genshin Asogi escaped execution, and he had been working for Gregson ever since.

The governor of Barclay Prison who dismissed Daley Vigil following Genshin Asogi's escape ten years ago. He is now in possession of the Asogi Papers, Genshin's last will and testament.

The father of Susato Mikotoba and old partner of Herlock Sholmes, Yujin was also a visiting student ten years ago, and was present for the historic autopsy of Klint van Zieks.

A judge in Japan and the country's current Minister of Foreign Affairs, Jigoku was a visiting student ten years ago and even testified on behalf of Genshin Asogi in his trial. He is a good friend of Yujin's.

Gameplay
Appendices
Walkthrough
The Adventure of the Blossoming Attorney
The Memoirs of the Clouded Kokoro
The Return of the Great Departed Soul
Twisted Karma and His Last Bow
The Resolve of Ryunosuke Naruhodo
Retrieved from "https://strategywiki.org/w/index.php?title=The_Great_Ace_Attorney_2:_Resolve/Final_Chapter:_The_Resolve_of_Ryunosuke_Naruhodo&oldid=922115"
Hidden category: