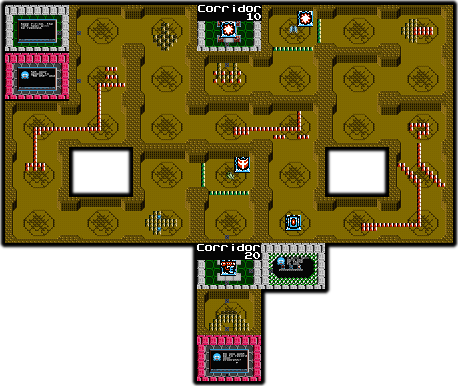 Start - X11 Y7
The final area of the game starts off with the usual Blue Lander checkpoint. There will be other checkpoints along the way, but it's always good to start off with one in case you die. Head through the north door.
X11 Y6
There are three blue darting creatures that leave item capsules behind and a red dome which does not serve as a mini-boss. While it's useful to attack the small blue enemies to obtain item capsules, don't be lured into a fight with the dome. Head through the north door.
X11 Y5

Before you jump right into Corridor 20, check out the door to the right first. Through the door is a Blue Lander who will once again sell you only one of three items. This time, the price is a steep 2000 chips. Your choices are upgrades for the Area Blaster, the Fireball, or an Energy Tank. The fact is, you should already be at level 3 for both weapons, and you can obtain an Energy Tank from a regular enemy, so save your chips and skip this store unless you truly need one of the weapon upgrades. When you complete the corridor, you will obtain the third and final offense upgrade that will boost your attack to level 4, the highest level possible. It will certainly be helpful against some of the tougher enemies.

This corridor is immensely difficult to survive, even with a large health meter. While you may consider using enemy Enemy Erasers, they won't be very effective against certain enemies like robots and diamonds. On the other hand, Fireballs and Repellers can make a good dent against those enemies, and clear a path ahead of you but they won't afford much overall protection. Choose the weapon that works best for you. This corridor blitzes you right from the start with the small blue laser firing ships. Green asteroids will start to drop from the top of the screen just as the bouncing laser firing robots join the fight from the lower corners. Eventually spinning red crystals and spinning blue ships join the fight.

Skulls start to drop from the top. They start red and turn blue when they get close and activate. Eventually, blue orbs will appear from the top and blue crystals will materialize. The screen will get even busier when a red orb trench digger appears on the left side while blue mounds pop out of the ground. Shortly after that starts, dinosaur skulls take off from the ground as well. Circle asteroids will begin to appear as the crystals and diamonds stop. The dinosaur skulls will continue until the boss appears. 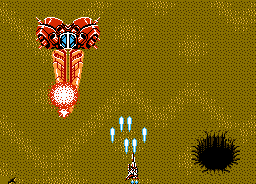 The boss of this corridor is a red Clawbot, the third of its kind that you will encounter. Aside from being colored red, its also much faster and it can take more damage than its predecessors. Despite those improvements, the strategy to use against it is the same and you shouldn't have too much troubles. Fireballs and Repellers do tremendous damage to it with each shot, while the Wave Attack is a slower method that give your greater protection against the missiles. Use of the Hyper Laser isn't highly advised. Pelt it with firepower until the lower portion separates from the upper portion, and then focus all your energy on the upper portion until it explodes.

When you complete the corridor, you are sent back to Area 10 to receive you reward: the final offense upgrade. Collect it and proceed through the door to the north. What follows is a winding one-way path through the entire area that ends with your arrival at Corridor 10. There are no choices to make as you progress through the area. 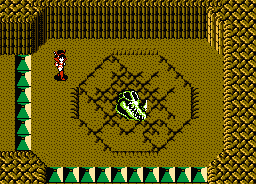 You'll encounter the first area mini-boss here. It is a disembodied dinosaur skull, the only mini-boss of its kind and the most difficult to defeat in the game. It floats around the room, and fires homing projectiles at you which home in on the Guardian's position. Using the fireball and grenades are best at dealing with the projectiles without need of using the Enemy Erasers, but hitting the boss is not that easy, because it moves fast. The Area Blasters can make quick use of this, though it is less likely to hit the projectiles. Once the boss is destroyed, an item capsule will appear in the middle of the room. Unfortunately, it will be a defense upgrade, and it probably won't be very helpful to you if you've already collected the maximum allowed. Head out to the left and continue along the path.

X8 Y3
When you reach the red barrier, take the left route. The right side leads to a dead-end.
X9 Y1
The barrier ends here. There's a door on the left side, and on the other side is a Blue Lander checkpoint. Step inside as a just-in-case, and return outside to continue north.
X9 Y0
A set of three bats and small blue darting creatures occupy the room. There's another door on the left side of the room. Step inside and you will receive a hint on how to open the gate to Corridor 10. When you're done head back to the left and continue on the path.
X11 Y2
Another barrier starts here, but this one is short. Take the bottom path and follow the path south.
X14 Y4

After struggling through the last few rooms, finding a free Energy Tank in an otherwise empty room is probably a welcome discover. Collect the tank to restore your energy and continue moving on to the right.
X13 Y4
When you reach the next barrier, take the bottom path, and follow it as it leads you between this barrier and another.
X12 Y0 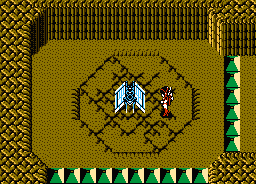 It will take you a short while to get around to this room, but when you do, you'll hear the sirens of the very last mini-boss arrival. In an unusual move, the second mini-boss of this area is actually a boss that you previously encountered as the boss of corridor 6, the Glider. However, it's the Glider that's at more of a disadvantage in this room. You are no longer restricted to just firing upward. You can aim at the Glider from any location and direction you please. Wait for the Glider to come to a stop and flap its wings before you shoot. Any particularly powerful weapon will make short work of the Glider, like the Saber Laser, Fireball, or Repeller. Victory will win you a pack of 20 Enemy Erasers. Collect it and head south to reach the end of the path, and the entrance to Corridor 10.

X11 Y1
This room contains a few small darting creatures, and a red dome machine. The door at the top leads to the last primary corridor: Corridor 10. Keep most of the yellow pyramids that block the entrance in tact to keep the red dome at bay. Then pass through the door.
X11 Y0

If you recall, the hint that you received on your way here told you to fire continuously until the gate opens. You don't have to shoot at the gate itself; just hold down

in the room so that you fire nonstop for at least 10 seconds. Jump in and clear out the corridor. Collect your reward, a pack of 20 Enemy Erasers, when you get back.

This corridor starts out with green falling asteroids. After a short distance, large skulls in the ground will appear, releasing three small skulls when they open their mouth. Blast the skulls until they explode. Asteroid circles begin to form as well. Then the action briefly stops. The green asteroids resume, along with spinning red diamonds. The green asteroids will stop, but they are replaced by blue laser ships and materializing blue crystals. Jumping laser shooting robots appear from the lower corners. Use Fireballs to quickly get rid of them.

At this time, blue orbs will start falling from the screen. Blue bursting particle plants will appear. Fireballs or Enemy Erasers can clear out the particles. Almost at once, a red orb trench digger appeared and a dinosaur skull will cross the screen. With the addition of the red spinning diamonds, this pattern continues for quite a while. The dinosaur skulls will continue and the blue laser ships will appear. When they stop, you will fly over a large group of ground-based skulls. After a few of these, the boss will appear. 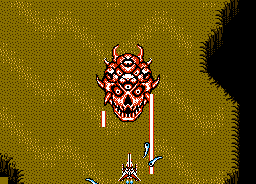 The boss of the corridor is a red Eyegore, very similar to the one at the end of Corridor 9. He's stronger and can take more damage, but his behavior is identical. Use the same strategy that you used against the previous Eyegore. A fully powered Fireball attack can actually block and erase the lasers that the Eyegore fires. If the right item capsules appear, you can remain in front of the Eyegore while shooting Fireballs until the boss disappears. Just be careful if you find that your health dwindles too low.

Once you destroy the second Eyegore, you will be transfered back to Area 10. You will be rewarded with another pack of Enemy Erasers. Once you're back in the labyrinth, it may not be clear where to head next. Hit

and view the sub-screen to take a look at the map. A square in Area 0 will be blinking. You'll have to exit back out of this area, and return to Area 0 to reach the entrance to the final labyrinth.