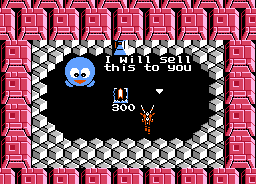 X10 Y11
While making your way over to Area 4, there's a stop you should consider making along the way. If you visit the large "N" at X11 Y9, come down one screen. Shoot the door on your left and go through it. You will see a Blue Lander who will sell you a Repeller upgrade for 500 chips. You can't afford that yet, but if you pass through the door at the bottom of his room, you will find another Blue Lander who will sell you a Hyper Laser upgrade for 300 chips which you should be able to afford. Pick it up and continue making your way to Area 4. 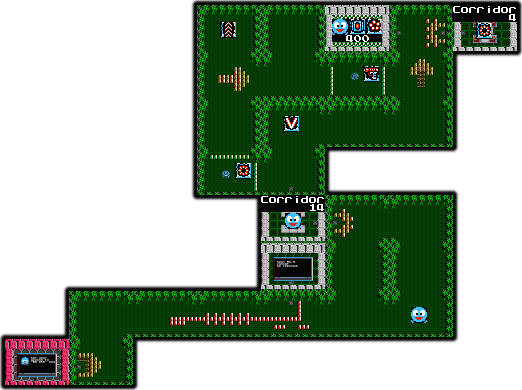 Start - X13 Y7
As usual, this area starts with a Blue Lander checkpoint. Open the door to the right and proceed along the path until you reach a barrier in the middle of the screen.
X15 Y6
In order to receive a hint about how to open the gate to Corridor 4, you must take the path above the barrier.
X17 Y6
Watch out for the bats, and open the door at the top. Enter the room above to read the hint on how to open gate 4. Then return to the start of the barrier at X15 Y6 and follow the lower route east.
X18 Y6
At the fork in the path, opt to go east instead of north to pick up a special item.
X19 Y6

This room features the mix of slow roaming creatures with two small darting creatures that typically leave item capsules behind when defeated. Clear them out and destroy the item capsule in the center of the room to reveal a Blue Lander. Collect it to increase your health meter by one unit. From here, you must travel two screens north and one screen west, but the order you do that in is up to you.
X18 Y4
Destroy the bats, and then open the door on the left to access the gate to Corridor 14.
X17 Y4

The gate to Corridor 14 will open automatically. Jump in and clear it out. When you return, you will earn another Blue Lander. You may have already crossed the 500,000 point threshold where you receive another health boost, or you may be very close to it. Either way, your health will be dramatically improved.

The corridor will start out with the raining green asteroids, but they are quickly joined by a laser firing lobster. The lobsters aren't hard to defeat, but you must dodge the lasers which linger on the screen as they descend to the bottom. This is followed by a series of new plants that possess a mouth and release large amounts of small bouncing mushrooms. Shoot the mouths to destroy the plants and end the release of mushrooms. Another new enemy shows up in the form of flowers whose buds literally leave the stalk and home in on you. Shoot the buds before they collide with you. The slowly descending mushrooms appear at the top of the screen as well.

Soon enough, the difficult-to-defeat blue orbs will appear at the top of the screen. Don't focus too much of your efforts on them, but do watch out for the spinning red ships that appear shortly after. More lobsters will appear to lob lasers at you as well. Pretty soon you will be dealing with a full screen of orbs, spinning ships, lobsters, and the pollen spewing flowers. Throw in asteroids, and you will be busy dodging a lot. It's a good idea to employ your powered up Hyper Lasers to clear away some of the clutter and increase your chances of finding item capsules. A few mushroom spewing mouth plants end the corridor before the boss arrives. 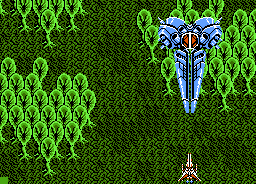 The boss of this corridor is a silver Clawbot, who will constantly try to hover directly over you and fires two homing missiles from either side. This boss has two phases. In the first phase, the lower extended portion of the ship opens and a large laser blast is shot from the center. When this happens, you must begin to move out of the way or you will be hit by the lasers. Then the lower portion closes before opening again to repeat the pattern. After taking enough shots, the lower portion actually breaks off from the upper portion, freeing the upper portion to rapidly fire lasers at you whenever it's above you. You must continue to pummel the upper portion with firepower in an effort to destroy it, while you avoid staying directly beneath it where the lasers can damage you. Meanwhile, the lower portion will slowly descend down the screen. Both sides can be shot at and destroyed independently, but you must evaluate whether that is a wise use of your time or not. Keep in mind that touching the detached claws will result in massive damage enough to put your health to last-chance hit point 0 instantly.

Overall, this boss is not too difficult to defeat as long as you steer clear of the center whenever the lasers are being fired. Weapons like the Hyper Laser, Fireball, and Wave Attack are all effective. Always try to stay one step ahead of it and attack from the sides. Be careful if you reach the side of the screen and need to cross back under the Clawbot to get away. Defeat the boss and return to Area 4 to receive a Blue Lander.

When you arrive back at the gate, open the door above you and travel one screen north.

Only two red bouncing balls guard this area. Take them out and open the item capsule in the center of the room. You will find a Cutter Laser upgrade. While you may not have relied heavily on this weapon yet, it's a good choice for when you are heavily surrounded by enemies. From here, return one screen south, and walk one screen west.
X16 Y3 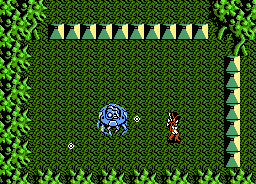 It's time to take on an area Mini-Boss. This one should be the now-familiar dome that chases you around the room. It's not terribly fast, and you should be able to easily out-maneuver and out-fire it in order to destroy it quickly. Your reward for doing so will be an upgrade to the Multi-Bullet weapon. It will be faster and stronger now. From this room, continue north all the way up the path, ignoring any large arrows that you see.

A few slow moving shellfish and two green bouncing balls patrol this room. Clear them out and open the item capsule in the middle of the room. You will find a Rapid Fire power-up. Whether you bought the extra Rapid Fire in Area 2 or not, you're nearing the limit of how much you fire rate can be increased. Return south one screen, and follow the arrow east for two screens.
X18 Y1 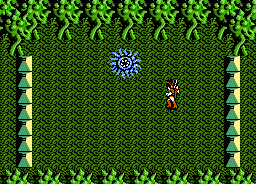 An upgrade of the previous leech, in blue, is fought here. The blue one, while slightly slower, has more health. Use the same strategy with going in an infinity symbol motion (a 90 degree "8") and keep on firing the Side Waves. If you're at full health, you can afford to stand in one place and use your Saber Laser. Let it continue to bounce into you and damage itself on the Saber. It should go down relatively quickly. An item capsule will appear in the middle of the room. Shoot it open to reveal a second offensive upgrade. You should now be at attack level 3, and you will only be able to earn one more. From here, exit to the right, and follow the arrow north one screen.

X19 Y0
You will end up in a room with two doors on either side. The door to the right leads to the gate to Corridor 4. But if you received the hint earlier in the area, you may recall that it tells you to ask for help from a nearby lander. It just so happens that there's a lander on the other side of the left door. This Blue Lander has a much more interesting offer than the one in Area 2. For 400 chips, he will sell you one item; either a Blue Lander health upgrade, an Energy Tank, or a Bullet Shield upgrade. The obvious choice here is the Blue Lander as not only is this upgrade rare, but there no limit on your maximum health increases. The Energy Tank, like the heart in Area 2, is a common item. There will be two opportunities to collect Bullet Shield upgrades after this in Area 6 and Area 8. After you've purchased an item, you must find a way to convince the Blue Lander to help you. Simply leave and return to the room continuously until it comments that it will remove the seal on Gate 4 for you. Then cross the room to the right and access the gate.
X20 Y0

If you've pestered the Blue Lander across the way for help, the gate should now open. Hop inside and clear out Corridor 4 to find a new key, and to get yet another upgrade to the Multi-Bullet weapon. With this upgrade, Multi-Bullet should now be at Level 3, your first fully upgraded weapon.

You will start the corridor out facing green asteroids and both varieties of flowers. Spinning red ships will replace the flowers after a short while, and then the flowers will rejoin briefly. At the same time, a bursting plant will appear and a pterodactyl will attack. Do your best to deal with the particles that burst from the plant. When the plants stop, lobsters will appear, along with both the floating and falling variety of mushrooms.

After a while, the blue asteroids that form circles before turning red and attacking will appear. The mushrooms will continue. Then the green asteroids and flowers will resume, joined by floating mushrooms. Two particle plants will pass by. Then shortly after, blue orbs will begin to appear at the top of the screen. Just before the boss appears, two particle plants with no base will fly down the screen and explode just like their rooted cousins. 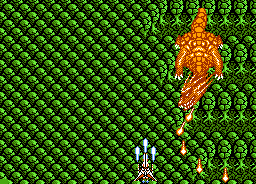 The boss of this corridor is a large orange dragon called Teramute. He appears in some location, spits out small fireballs in a wide arc, and disappears before reappearing somewhere else. He may look fearsome, but his stationary behavior, and relative weak attack means you should be able to make short work of him. Get in front of his head and fire your main weapons along with the Saber. The Saber will destroy the small fireballs. He will be defeated after only a couple of appearances.

For your success, you will earn a new key which will provide you with access to Area 5 and Area 6, as well as receive yet another upgrade to the Multi-Bullet weapon. Exit Area 4 and travel a short distance through Area 0 to find the entrance to Area 5 at X15 Y9