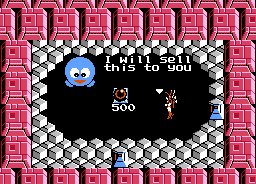 X10 Y10
If you picked up the Hyper Laser upgrade in Area 0 for 300 chips, then you may remember passing up the Repeller upgrade for 500 chips. You should be able to afford it now, so return to the location of the shop, and purchase the weapon. It will provide you with a more effective weapon that slowly cruises up the screen, causing a lot of damage, and it won't run out like the Fireball or Area Blaster. 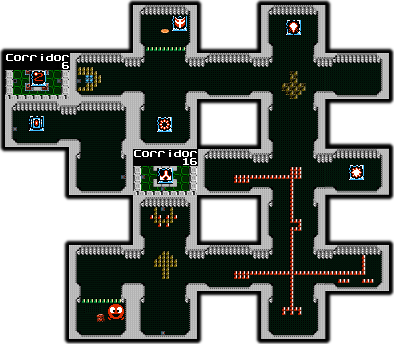 In an unusual move, this area actually starts at the entrance to Corridor 6. You may think that you need to explore this area to find the clue that tells you how to open the gate, but the clue for this area is actually found in Area 0. If you visit X13 Y15, it will tell you to shoot a special weapon anywhere in the room. Any special weapon that consumes Chips will work actually, even the Saber Laser. The key is that your Chip count has to go down inside the room in order for the door to open. There's little reason to wait unless you'd rather explore the rest of the area and collect power ups first. If you clear the area, you will earn an Area Blaster upgrade. It's not at full power yet, but it uses considerably fewer chips per shot than it will at Level 3.

This corridor starts out with green asteroids and spinning orange diamonds. They are eventually joined with circular asteroids and a volcano. After the first volcano, the asteroids will stop, but the diamonds continue. More volcanoes pass below, spewing little green crystals. Use the Wave Attack to effectively clear a path through them, and potentially stop the volcanoes entirely. A group of blue orbs will appear near the top of the screen. A set of large blue tracking crystals will materialize while you continue to fly over volcanoes. After the blue crystals, the smaller orange crystals begin to appear in their place.

When the orange diamonds return, you will have to fly over pairs of volcanoes which will make it impossible for you to attack the crystals coming out of both. Attack one, and do your best to protect yourself from the remainder. Activate the Bullet Shield for some additional protection. Blue orbs will fall down as the volcanoes thin out. Than blue crystals will start materializing again as another volcano pair appears. Small orange crystal follow. The valley on the bottom of the corridor will widen, and orange diamonds appear over more volcanoes. A set of blue orbs will appear near the top, but they will hardly make it down to the middle of the screen before being removed in preparation for the boss. 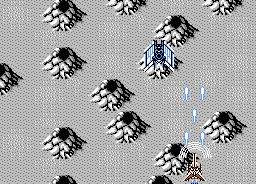 The boss of this corridor is known as a Glider, and it is the smallest boss in the game. Appearing as a small winged mechanical creature, it loops around the screen impervious to any attack until it holds still in one place, flaps its wings, and shoots missiles at you. This is the only time you may damage it with your weapons. Since it holds still to attack, you can conceivably use your Saber Laser against it, but the Fireball or Wave Attack are equally effective and don't put you at risk of colliding with the boss when it starts flying around the screen again. Collision with the boss can be quite damaging. Nevertheless, the missiles it sends won't really overwhelm you. The biggest concern is getting out of its way when it crosses the bottom of the screen.

X18 Y11
When you arrive in this empty room, investigate the path to the south first.
X18 Y12

In this room, you'll find the lone blue spider who will rapidly multiply if you give it a chance. Remove it and shoot the item capsule in the middle of the room. You may be disappointed to find that it's another Multi-Bullet tile. If you've already increased this weapon to level 3, all this tile will do for you is restore some chips and health. However, if you missed one of the previous upgrades, this one should help you out. When you're done, return north to the room above, and keep going.
X18 Y10 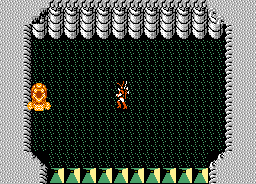 This dead-end room serves as home to a mini-boss. This boss should be familiar to you, the boss who appears somewhere, lifts its head, and then ducks back down leaving some roaming creatures in its place before appearing somewhere else. The same simple strategy applies: stand in front of where it appears, blast it for as long as it's vulnerable, take out the creatures it leaves behind, and move to the next location. For your efforts, you will receive another defense upgrade. In addition of collecting the other 3 defense upgrades, your movement speed will also increase! Collect it and return to the room below, then proceed to the east.

X20 Y11
Remove the large group of bouncing balls in this room and ignore the arrow pointing south. Investigate the room to the north first.
X20 Y10

Deal with the roaming creatures and small slimes that patrol this room, and shoot the item capsule near the center. Inside, you should find the first fireball upgrade, which should elevate the weapon to Level 2. Although the weapon still has one level of power to go, it's still a formidable upgrade that can erase the bullets of enemies. From this room, continue walking south.
X20 Y13
When you first encounter the red barrier that divides part of the area, explore the room to the right first.
X21 Y13

Assuming you don't have 255 Enemy Erasers yet, you'll want to visit this room to collect another pack of 20. It contains the combination of small blue darting creatures with the quickly multiplying ice blocks. Spare yourself any hardship and collect the erasers as fast as possible, and get out. Return to the previous room and ignore the lower path to the right which leads nowhere. Instead, cross over to the left.
X19 Y13
Not one, but two sets of ice blocks will quickly multiply here. Get around to the lower side of the barrier and follow the path that it takes.
X19 Y15
When you reach this room, stop following the barrier around, as it leads to nothing useful. Instead, investigate the path to the west, past the following room with the upward arrow, until you reach a mini-boss.
X17 Y16 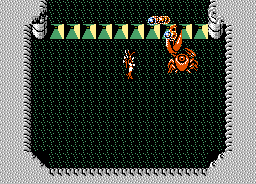 The mini-boss in this room is the crab-like boss that you've faced before. Once again, lure it to the top of the screen where most of its bubbles will be rendered harmless, and blast it with your main gun and the special weapon of your choice. At this point, your Level 2 Saber Laser should be strong enough to take the boss out in just one appearance. Your reward for defeating the boss will be a Red Lander, which should boost your maximum chip carrying capacity from 800 to 1200. After you collect it, return to the room with the upward arrow and follow it north.

When you arrive through the door, you will reach Corridor 16. The gates will open automatically. When you complete it, you will earn a Back Fire weapon upgrade. This is the last upgrade to this weapon that is freely available. If you already purchased the Back Fire upgrade for 150 chips from Area 0, the this upgrade will increase your Back Fire weapon to its maximum Level 3.

A new enemy will greet you at the entrance to this corridor. A bouncing laser-shooting robot will appear in a lower corner. It will fire lasers constantly as it bounces slightly higher to the top of the screen. Be careful taking this enemy out as the lasers are very damaging. A few pterodactyls will appear down the middle before a circle of asteroids appear. Green asteroids appear for a while, followed by exploding particle plants. Use a special weapon that will protect you from the shower of particles, like Repeller or Fireball.

Blue ships are accompanied by green asteroids. This very quickly changes to the materialization of both the larger slower blue crystals, and the smaller faster orange crystals. A single bullet showering ship will appear before a set of more particle plants. Green starfish and blue orbs will appear next, and it appears that they are intended to appear throughout the last section of the corridor, but a bug seems to prevent as many from appearing as should, so you get an easy ride to the boss. 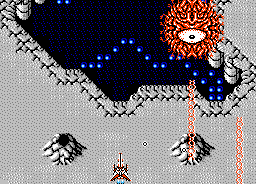 It's just as well, because the boss of this corridor is a very unwelcome sight: a Red Optomom. While this Optomon will not shoot fast seaweed, it releases even longer strands of seaweed that do much more damage, and the bullets do more damage as well.

However, if you have a Level 2 Fireball, this fight is much easier to handle. The Level 2 fireball will not only destroy the bullets, but will destroy the seaweed! Immediately switch to this weapon, and pick a side to wait on. As the Optomom approaches your side of the screen, shoot the Fireball upward. It will make its way up the screen and destroy any strands of seaweed that the Optomom is in the process of making, in addition to dealing damage to the eyeball. If you do not have the powered up Fireball, you'll have to use the same strategies against it that you used to defeat the Blue Optomom; thankfully, you have a lot more powerups to deal with the bullets while doing more damage.

If you decide to get to this corridor late and get the Level 3 Grenades, it should also destroy the seaweed and the bullets.

Your reward for winning the fight will be an upgrade to the Back Sider weapon. From here, you can exit through the left door and follow the path north.

One more useful room is found at the end of the path beyond Corridor 16. In a room devoid of any enemy, an item capsule in the center holds a simple Energy Tank, which may be useful to restore energy that you lost in the fight against the red Optomon. Collect it and exit through the door on the left to return to Area 0.
X15 Y12 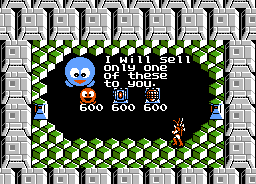 In a surprise move, you will arrive in a shop that was previously inaccessible to you until now. A Blue Lander will sell you only one of three items for 600 chips; A Red Lander, an Energy Tank (which you just collected), and a Grenade weapon tile. The most obvious choice here is the Red Lander; you are going to need those extra chips throughout the game. The Energy Tank is a common item and should be avoided like in Area 2 and Area 4. The Grenade is available immediately upon the first Sub-Boss in Area 7. Grab it without hesitation, and you maximum chip count will be raised to 1600. Exit through the door on the left to return to Area 0. You'll find the entrance to Area 7 at X14 Y14.