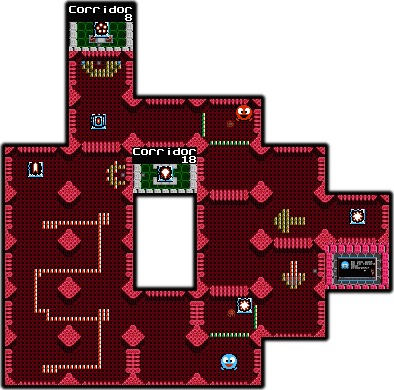 Start - X10 Y16
Like Area 6, this area starts off right away with the entrance to Corridor 8. However, it is recommended that you explore the area below first and come back here later, since Corridor 18 is easier and you can get some good stuff along the way.
X10 Y18

Beware of the shellfish that accompany the blue bats in this room. Clear them out of the way and shoot the item capsule in the middle of the room. Inside, you'll find an Energy Tank, which might actually be a welcome site if you got hit by the bouncing balls in the room above. Then proceed right.
X12 Y18 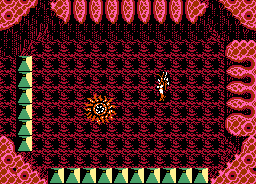 The first mini-boss that you encounter is none other than the red leech. It's faster, does a lot more damage, and has more health! The same tactic of walking in an infinity symbol (90 degree "8") and spamming side waves will work, but you have to be much more careful of its speed. If you have enough health, the kamikaze Saber Laser / Front Wave tactic will also work. Even if you get very worn down in health, don't worry, as your reward for defeating the boss is a Red Lander. Collecting the Red Lander not only increases and fills your chip capacity, it restores all of your lost health, so you'll be in good shape before you leave the room. Your new chip capacity is 2400, and in fact you will gain access to the fourth and final main gun bullet spread, as long as your chips are above 2050. Four bullets will be shot forward in a rather wide arc. Collect the lander and head south.

X13 Y19
You may be for a bit of a surprise when you encounter, not one, but two blue domed machines that usually serve as labyrinth mini-bosses. After fighting them for as long as you have, you should have mastered the technique to defeating them as regular enemies. Take care of them and continue south. Ignore the large arrow and explore the room to the east first.
X14 Y20

No enemies will greet you in this room, so head right for the item capsule in the center and shoot it to find more Enemy Erasers. If you made good use of them in the past corridors, then you're probably happy to find more of them. Now follow the path to the left that winds around.
X13 Y21
Fight that bats that patrol this room. Once they're gone, hold off on following the arrow's advice, and open the door on the right side of the room if you wish to find a Blue Lander check point or receive a password. Then when you're done, continue south.
X12 Y22 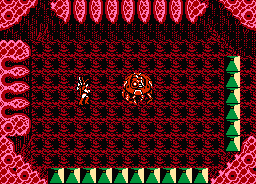 You'll find the second mini-boss a few screens directly south of the first mini-boss. While two blue dome machines may be considered standard enemies, a red dome machine is still a mini-boss. It has more health and therefore takes longer to destroy, but ultimately you should have no problem putting it down with the usual techniques. When it is destroyed, you will find more Enemy Erasers in the item capsule that appears in the center of the room. Keep stocking up on them for the difficult corridors that you will soon face. Then head south.

In this room with no enemies, you'll find another item capsule. And inside that capsule, you'll find a welcome Blue Lander health upgrade. As long as you're over 1 million points, and have collected every other Blue Lander, your maximum health should 19 at this point. Follow the path west until you reach a barrier.
X10 Y22
When you arrive at this barrier, you should proceed north, which is the fastest path to the entrance to Corridor 18.
X10 Y19
The entrance to Corridor 18 is just beyond the door to the right. But before you visit through the door, explore the room to the left first.
X9 Y19

You'll encounter an interesting new enemy in this room. It is a creature that appears near the top, and runs down to the bottom, leaving a trail of small slimes behind in its wake. When it reaches the bottom, it reappears somewhere else at the top and runs down again, leaving more slimes behind. Deal with the creature before you worry about the slimes. Then shoot the item capsule in the middle of the room to find the final upgrade to the Hyper Laser weapon. Once you collect it, proceed back to the right and enter Corridor 18.
X11 Y19

When you arrive, the gates to Corridor 18 will open automatically for you. Jump in and clear out the corridor. When you return, you'll be rewarded with the final upgrade for the Fireball weapon. This will double the speed of the shot and do a little bit more damage than usual. Now, you can spam these Fireballs a lot more freely.

Continuing the biological theme, you will fly over a series of veins. The corridor starts out with spinning blue ships that shoot bullets at you. These blue ships are joined by the other type of blue ship that fires lasers. The lasers are much more damaging and should be avoided altogether. Soon asteroids will join the fray, both green falling ones and the circular formations.

The ships will stop, but they are soon replaced with manta rays as well as both varieties of mushrooms, the slowly floating kind and the quickly falling kind. A blue particle blob will pass by as well. Soon, the action will reduce to green asteroids and floating mushrooms. Two particle plants will pass by, exploding just before they reach you. Then only green asteroids appear before the corridor boss arrives. 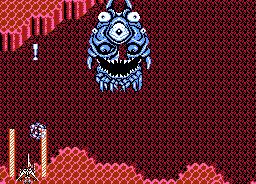 This boss' name is Grimgrin. He moves about the screen in a particular pattern that you should become familiar with. He will fly all around the middle of the screen in a manner that allows you to avoid him if you remain on the side. He fires eyeballs and bullets at you, none of which are a tremendous threat. The most dangerous thing you can do is remain underneath him when he flies to the bottom of the screen. That is why his pattern of motion is so important to pay attention to. This fight won't be difficult unless you are impatient and remain where you shouldn't in an effort to get a few more shots in on him. Use a weapon with good range like the Wave Attack, Fireball, or Repeller. Get as many shots in as you can while he is still high in the screen. Your newly powered up Hyper Lasers make a good choice of weapon to use against this boss too. They are wide and make it much easier for you to hit Grimgrin from the side without needing to sit directly below him.

As you attack him, the four eyeballs around his center eye will be destroyed, first the bottom pair, then the top pair. He may appear close to defeat when he is down to one eye, but don't be fooled. When he loses this eye, he enters a final phase where he fills the screen with bullets and eyeballs until he is defeated. Don't panic, and continue to pay attention to the pattern of his motion. He will release so many eyeballs that you will likely create a lot of item capsules as a result of shooting at them. Assault Grimgrin with patience and you will eventually defeat him. Then you'll fly back to Area 8 where you'll recieve an upgrade to the Fireball weapon.

Make all your way back to X10 Y16. If you visited the room in Area 0 which gives you the hint about Area 8 in X13 Y16, you will learn that you need to turn off any special weapon by setting the weapon selection on the sub-screen to "NO USE", and fire (with the

button). This will cause the corridor gates to open. Jump in and take on Corridor 8. When you return, you will earn the next Bullet Shield upgrade, which will boost it to Level 3. While it gets bigger and faster, it's still not spectacular against enemies that require a lot of hits, but it is more effective against very basic enemies.

Green shot blockers will come out to greet you as circular asteroid formations appear. By the time the second formation appears, both blue and red spinning ships will join the fight. Choose your moments to approach and remove the green shot blockers carefully. Before long, you will be flying over large eyeballs, and floating mushrooms will also appear. This will continue all the way until the end of the corridor. If all this isn't enough, laser shooting ships will appear near the end.

Now is the time that you want to start giving the Enemy Eraser weapon some serious consideration. The Enemy Eraser can even clear out the green shot-blockers and the red asteroids that lead in the creation of the asteroid circles. With the screen constantly filling up with enemies, and the green shot blockers getting in your way, it may become difficult to defend yourself from all the threats present on the screen. In that case, switch to the sub-screen and arm the Enemy Eraser. Do not fire them off rapidly. Continue to fire your regular gun and wait for the screen to fill up with enemies, and then use the eraser once. Then wait once more for the screen to become busy before using another. You shouldn't need to use much more than 20, a single packs worth, to make it through the corridor in once piece. You may even obtain more erasers through an item capsule dropped by a defeated enemy. 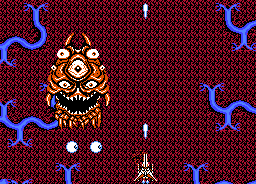 After fighting through Corridor 18, it shouldn't come as too much of a surprise that the boss of Corridor 8 is another Grimgrin. This one is red, with more health and his projectiles are harder to destroy. The same exact strategy applies: pay attention to the pattern of motion that he follows, and get out of his way when he approaches the bottom of the screen. Once again, Wave Attack and the newly powered up Fireball will help you. The Hyper Laser will destroy both the eyeballs and the bullets with ease to a point where Grimgrim's projectile attacks won't even touch you due to the laser's wider distance from you. Keep your distance and pour on the firepower until he is destroyed. You will earn a new key and when you return to Area 8, you will get the final upgrade for the Bullet Shield. Then you're ready to return back to Area 0 and make your way to Area 9. The entrance to Area 9 can be found at X9 Y8.