The new gate in Area 0 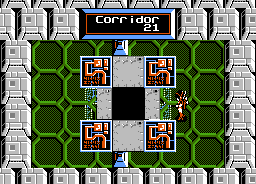 After defeating every boss and clearing every corridor in the game, a new corridor will appear in Area 0. You may have passed through this nondescript room before, but it will now be populated with a corridor gate. Head to location X9 Y11 to find the entrance to Corridor 21, the last corridor in the game. This will be your last chance to explore any part of the labyrinth and maximize everything, including shops. Here is a chart:

Before you hop in you may want to ensure that; you have a full meter of health, you have a full inventory of chips, and your favorite weapons are as strong as they can be. If you're prepared, then dive into the corridor and prepare to face a number of bosses back to back.

This corridor could very well be considered a boss-rush stage, often representing that specific area. The only regular enemy that you will encounter are falling green asteroids. Other than that, all you will face is one boss after another. Only use your main guns on the asteroids, conserve your chips for the bosses. Here are the bosses in order: 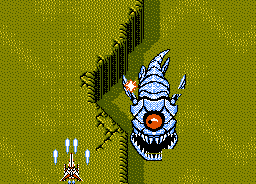 Aqua Area Boss - Blue Fleepa
This should be a warm-up fight. While you have become considerably more powerful, this fishy boss has not. As a result, don't be surprised when you destroy it with only two or three shots from a powerful weapon like the Fireball. You technically don't need to use special weapons to get the job done. 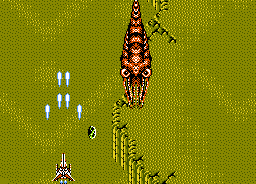 Next Boss - Zibzub
You can remain directly below the boss as it bounces around the screen, and fire directly at it. The Fireball or Repeller should maximize the amount of damage you do to it with each shot. 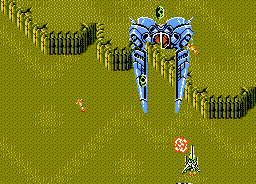 Forest Area Boss - Blue (Level 2) Clawbot
Continue using the tactic of firing upward at it with the Fireball or Repeller for a balanced fight; Saber or Cutters to quickly kill the first part aggressively, or use the laser for the safest fight (but least damage) until the lower portion drops off. Then lead it to either side and shoot at it indirectly when the upper portion attempts to line up above you and blast you with its laser beam. 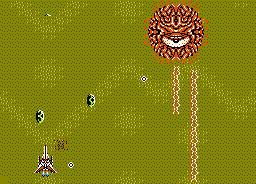 Crystal Area Boss - Red (Level 3) Optomom
The Fireball (Level 2 or 3) and the Grenade (Level 3) are the only weapons that destroys the strands of seaweed that the Optomom releases. While you are highly leveled up, avoid touching the seaweed as it can still do some good damage to you. This is the ONLY Optomon fight that can generate power-ups because of the Asteroids. 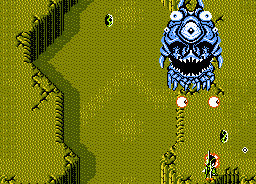 Bio Area Boss - Grimgrin
Though the Optomon increased the difficulty a bit, this one will increase it a bit more. Since your weapons are all powered up to Level 3, most of them should do the job done well enough, especially when Grimgrim spouts a lot of eyeballs to generate power-ups. Lasers, Fireballs, Repellers, Grenades, and Wave (final part) are your safest bets. Cutters and Saber for a quicker yet risky fight. 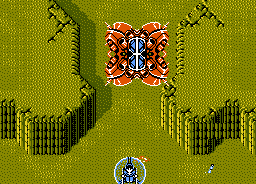 Wasteland Area Boss - Red (Level 2) Bombarder
After a much tougher fight, this boss is just as easy as it was in Corridor 19. Given that your shields and gun are maxed out, the missiles hitting you shouldn't even see noticeable damage at all, let alone the projectiles will generate power-ups to replenish lost chips and health. The boss will take longer to defeat, but that should be okay; you are going to need all the health and replenishing before facing the next phase of this corridor. 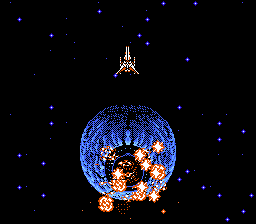 At this point, you will escape from the corridor, and begin navigating through the exit from planet Naju. When you make it far enough away, the planet's self-destruct sequence will initiate, and Naju will explode. But you're not out of the woods yet. In the vacuum of space, you will now be flying through a field of red asteroids as you make your approach to the evil creature that nested inside of Naju and is now incredibly angry to have lost its home. 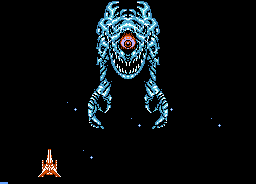 If you did not conserved enough chips and Enemy Erasers from the Bombarder fight, you are in for a real hurt. The very last boss of the game, known as "It" is certainly the toughest. This large creature occupies a lot of space on the screen, which gives you very little room to safely maneuver. It has a variety of attack methods:

At this rate, all of your weapons should be upgraded to its maximum power. Take a look at the following strategies for the only effective weapons:

It will take a very long time, but the boss will eventually change from blue to orange, indicating that you have done a great deal of damage to it. Further damage will result in the boss changing from orange to red. Whenever the boss' color changes, it attempts to increase the challenge by throwing more bubbles and missiles at you, which increases in speed and how much can be shown on-screen. While it actually works to your advantage since more bubbles and missiles means more chances for item capsules to appear and restore any lost health, don't overrely on it too heavily. Focus all of your attack power on the eye of the boss, and do your best to dodge the claws whenever they reach down to the bottom of the screen.

After the boss turns red, it will only be a matter of time before it is destroyed. If you succeed, you will be treated to the ending credits of the game. You will also receive a password for the challenging Corridor Rush mode of the game. Congratulations.