Corridor Rush is a special mode of the game that allows you to fly through all of the Corridors in an uninterrupted sequence, without the additional component of exploring the labyrinths. To access Corridor Rush mode, you must input the special password which is given to you after you beat the regular game. That password is "TGL" in NES version, and "えいえるじい" (which sounds like "ALG") in Famicom version. Once entered, you will begin in Corridor 0, just as you would for a regular new game. However, when you complete Corridor 0, your score will be evaluated, and you will be awarded power-ups based upon your score, and then you will automatically advance to Corridor 11, and so on until you reach and complete Corridor 21. The sequence of corridors follows the game's order, not the numerical value, so the full sequence is:

The contents of the corridors are identical to what you would encounter in a regular game. None of the enemies or bosses change in any way. What will change, however, is the degree to which you power-up before you reach each corridor. There is a good chance that the Guardian will be less powered-up by the time you reach a particular corridor than you would if you reached the same corridor in a regular game. This forces you to focus a little more on the Guardian's survival. 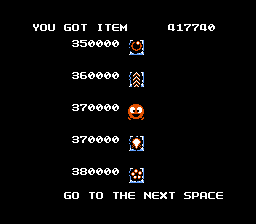 In order to obtain power-ups, you must achieve particular scores in the ten thousands of points. Power-ups are awarded based on the number of points you have earn prior to reaching the corridor boss. This means once you hear the warning sirens which indicate the approach of the boss, all points you accrue from that point forward do not count toward your total accumulation for the corridor. Any points you earn for attacking and defeating a boss are ignored. The score upon which the power-ups are based is strictly the accumulated total of the regular enemies that you defeat in the corridor. Therefore, to maximize the amount of power-ups you earn, you should do everything you can to attack as many enemies as possible. Failing to do so will result in fewer power-ups awarded, and therefore greater difficulty clearing the more difficult corridors that you will face in the future.

There are a few differences in the power-ups you can receive in Corridor Rush mode.

There is one catch to the awarding of power-ups: you may only obtain five different power-ups at one time between corridors. Therefore, if your score entitles you to more power-ups beyond a fifth, you will not receive them until you complete the next corridor, and only if they fall within the next available five power-ups. For example, if you score above 10,000 points in Corridor 0, you will earn four power-ups just for completing the corridor and a fifth power-up for reaching 10,000 points. A second power-up is available at 10,000 points, but you will not receive it until after you complete Corridor 1. The table below indicates which power-ups are awarded to the Guardian in order and at what particular point level.