For any given area beyond 1, there are corridors n and n + 10. For example, Area 2 contains Corridor 2 and Corridor 12. Corridors numbered 11 through 20 are secondary corridors. They are always open and available to the player as soon as he or she finds it. It is also typically the easier of the two corridors. Corridors 1 through 10, on the other hand, are the primary corridors. Each is locked and usually a little more difficult, but these are also the corridors where the keys are hidden. To unlock these corridors, the player must find a hint somewhere in the area that reveals the secret to unlocking the gate. Two of the hints are found in Area 0 rather than their respective areas. Each time one of the Corridors from 1 to 20 are cleared, the entrance to that corridor is sealed and a weapon is left to collect.

The Guardian Legend is fairly non-linear. You are not required to play through the areas or corridors in a particular sequence. That being said, it is highly recommended that you attempt to follow the path through each area in numerical sequence to ensure that you are sufficiently powered up to survive each section. Advancing to a difficult area too soon can result in a quick demise. The game is complete when all of the areas have been explored, and all of the corridors have been cleared. When this occurs, the exit corridor, Corridor 21, appears for the player, opening the way to the final battle. 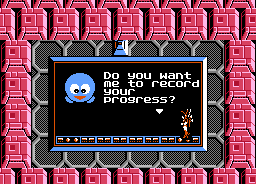 Throughout the game, you will find rooms that contain large Blue Landers who will speak with you. They offer to provide you with a password that will allow you to continue your game. To receive a password, you must set your special weapon selection to "NO USE" on the sub-screen, and press

. However, you do not need to obtain a password to get the benefit of visiting these rooms. If the Guardian loses all of her health and dies in a corridor or in the labyrinth, and you choose to continue, you will continue from the last Blue Lander checkpoint that you visited. If you never visit a checkpoint, you will resume in the center of the labyrinth, where you appeared after completing Corridor 0. You will always return with all of your items and upgrades in tact.

Each room in the labyrinth may contain different blocks arranged throughout the room. This table presents a guide to those blocks.

Weapon upgrades are available around NAJU. The higher the upgrade, the more powerful and useful the weapon can be, but more chip consumption, requiring Red Landers to expand the chips. Weapons can be upgraded to Level 3.

If you have 5 Shields in your inventory (including your default 1 shield), your walking speed and ship speed in the labyrinth will increase.

Red Landers not only expand your chip count, but also improves your normal gun.

You start the game with 8 Hit Points (8 bars on your energy gauge). You can increase this limit in two ways:

NOTE: Do not achieve a score above 9,999,999 or else the game will instantly softlock.

Due to limitations of programming in the game, there are a few tips and tricks in the game:

If you have the movement speed up (5 shields), you can walk through the indestructible pyramids by moving diagonally in between. This trick can be used against yellow pyramids and item capsules as well. You can only walk horizontally.

If you have the Level 2 Fireball on Labyrinth Mode and have the movement speed up, you can create an invincible damaging forcefield by simply holding the direction that the Fireball is moving because the walk and fireball are both the same exact speed! Abuse this as much as possible before upgrading to Level 3 Fireball.

If you have the Level 3 Fireball on Corridor Mode and have the movement speed up, you can create an invincible damaging forcefield by simply holding up while shooting the Fireball because the flight and fireball are both the same exact speed! Unlike the Labyrinth trick, this is less practical because by the time the invincibility ends, you are stuck on the top of the screen left wide open for attack. Also, you get the Fireball 3 very late in the game. This move is only effective against specific bosses and/or tough situations like mini-crystal or exploding blue plants chasing you.

On shops with 3 items, there is a trick where you can buy the entire shop. To do this, hold start while collecting the item. Normally, collecting an item would make the other 2 items disappear, but if you do the trick, the 2 other items will not disappear. If you see a lander, that is recommended to retrieve first before the other items. You can get weapon upgrades much earlier than usual.