The House in Fata Morgana

From StrategyWiki, the video game walkthrough and strategy guide wiki
Jump to navigation Jump to search
The House in Fata Morgana | Table of Contents | Gameplay | Walkthrough 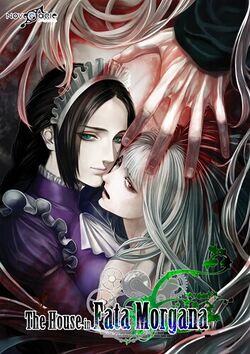 The game was written by Keika Hanada, with art by Moyataro. The developers did not specifically target men or women with the game, and instead just intended to make a game for players who enjoy stories. Hanada spent more than a year planning the story, which was influenced by Tanith Lee's books, and the films Millennium Actress (2001) and The Best of Youth (2003). To keep the text from distracting the player, it was mostly written in modern Japanese, with only little use of archaic speech. To make the game feel unique, Moyataro made use of heavy coloring and shading, to portray a "more realistic kind of beauty" compared to the "cutesy" anime-like artstyle common in Japanese visual novels. Another important aspect in making the game feel unique was its music: more than half of the songs are vocal tracks, intended to make the game feel like visiting a theatre with someone singing in the background. Five composers worked on the music, and wrote 65 different tracks.

The House in Fata Morgana is a visual novel set in a mansion, where a spirit appears with amnesia. It meets a Maid in the mansion, and the two view the mansion's past in different time periods – 1603, 1707, 1869 and 1099 – to learn what has happened to its residents and to try to get the spirit to regain its lost memories.