From StrategyWiki, the video game walkthrough and strategy guide wiki
Jump to navigation Jump to search
The Immortal | Table of Contents | Gameplay | Walkthrough 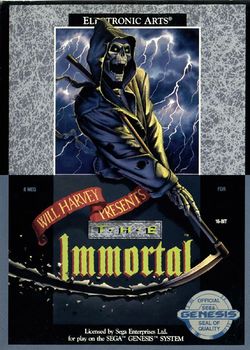 The Immortal is a fantasy isometric action-adventure game by Electronic Arts, released for a variety of platforms. The main plot revolves around a wizard attempting to find his mentor in a large and dangerous labyrinth.

The Immortal is legendary for its profoundly-steep learning curve and practically-impossible difficulty. Indeed, some sections of the game seemingly required the player to die in order to progress. There are also a number of "one false move"-style death traps, and it is even possible to die in the very first room of the game. It is also remembered for the copious amounts of violence it contains; there are over 30 death animations for the player character, involving a variety of traps and monsters.

The game has either 7 or 8 levels, depending on the version.