The Island of Dr. Brain/Cave

You enter the cave and find a number of interesting objects. There is a microscope in front of you, a coffin to your left, and a set of poles to your right. Click on the red button on the microscope to turn it on. click on the newly glowing green screen to start the first puzzle. 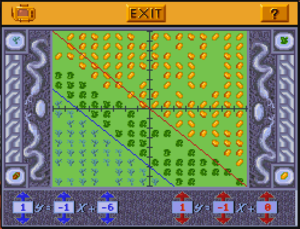 Dr. Brain seems to believe that the best way to segregate organisms is by color and asks you to do so using a series of equations. Though knowledge of algebra isn't strictly necessary, it helps. Each higher difficulty will add another degree to the equations that can be manipulated. Novice puzzles only employ 0th degree equations, making them incredibly simple. Standard puzzles will use 1st degree equations, or linear equations. Expert puzzles will add a 2nd degree equation, giving you a polynomial equation to work with in addition to a linear one. 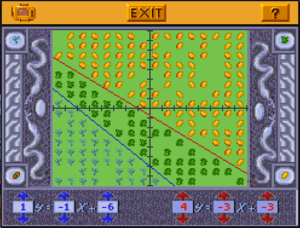 the second step is to move the second line near the other separation and mess with the first two buttons until Dr. Brain congratulates you.

For the novice puzzles, simply move the single variables up and down to align the crosshairs where the colors change. It really couldn't be any simpler.

The standard puzzles can be slightly more difficult. In most cases, there will be a simple one and a harder one. Because both equations are both capable of hitting either segregation point, it doesn't matter which one you align on which. Use the first two numbers of a color to change the angle of that color line and use the third to move it up and down. The simpler one will usually have an X value -1 or 1, meaning that you don't have to touch the X number. In this case, the lower segregation is the simpler one with a y-value of 1.

Once the simpler one is aligned, you can start messing with the second one. Set the Y to 1 and the X to -1. Change the Y-value up and the X-value down until you get a line that looks somewhat like the one that you need. Then modify the third number so that the line gets as close to the segregation as possible. If it doesn't quite fit, change the X down one and the Y up one and try it again. Eventually, you will get the right combination of all three variables. 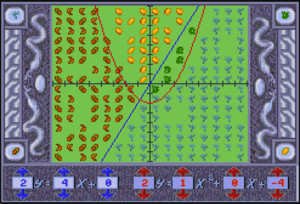 Align the linear equation before the polynomial equation.

The expert level puzzles will employ a more complicated equation, but the basic principle is the same. For these puzzles, the linear equation will always be the simpler one. Make sure the linear equation is aligned before messing with the variables for the 2nd degree equation.

As far as the polynomial equation goes, there is no exact formula to getting the correct orientation. Mess with the buttons that control the curve to get an idea of how each variable affects it.

When you correctly segregate the microorganisms, the microscope will print out a yellow piece of paper. Use this piece of paper to interact with the stone sarcophagus on the left side of the screen. The paper inserts into the slot and the number series puzzle will pop up. The object of this puzzle, simple enough, is to find the number that completes the series. Numbers can be entered by hitting the arrows next to the digits at the top. Correct answers will turn black and lock in, while incorrect answers will turn light blue and cause the octupi at the top to get a little more angry. Four incorrect answers and you are kicked out of the puzzle and must start over with a different set of series.

There are several types of series to look for:

When you have filled in each series with the correct number, the sarcophagus will open and a skeleton will pop out. The skeleton gives you a set of stone disks. These disks can be used with the poles on the right side of the screen. Activate the poles with the disks to initiate the 4th puzzle.

This puzzle is a classic Tower of Hanoi. The object of the puzzle is to get all of the rings to be stacked on the far right pole in the same order they started. The only two rules are that only one disk can be moved at a time and a larger disk cannot be placed on top of a smaller one.

The solution to this puzzle is fairly simple. From left to right, label the poles A, B, and C. Alternating between the smallest and the next-smallest disks, follow the steps for the appropriate case: 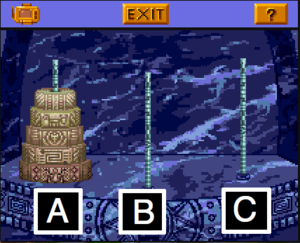 For an even number of disks:

For an odd number of disks:

Wikipedia has a useful illustration of this pattern that can be found here. The fewest possible moves for 4 disks, 5 disks, and 7 disks is 15 moves, 31 moves, and 127 moves respectively.

When the final disk sets into place, the iron door at the back of the cave will open. Click on the opening to move into the lagoon.