The Island of Dr. Brain/Hut

With the counterweights in place, you can now safely cross the bridge and enter the hut on the the hill. Inside you can find that Dr. Brain's flair for strange decorations knows no bounds. Click on the screen of the computer to start the mask match puzzle

For this puzzle, you are asked to find 5 sets of 3 matching shapes. For Novice, Standard, and Expert difficulties, you must sort through various shapes, hieroglyphics, and masks respectively. Some may jump out at you, especially on Novice difficulty, but otherwise, many of the objects tend to look similar. To keep from getting lost, take a systematic approach. Start at one of the corners and go through the shapes one by one until you have either found two exact matches or have examined all the shapes. 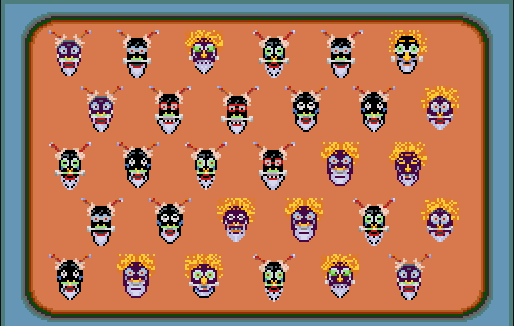 For the Standard and Expert difficulties, to tell the shapes apart, break each one up into pieces. When dealing with the masks, look at the hair, the eyes, and the mouth individually. For instance, look at the figure at the top right of the example given and notice that its hair is wavy and yellow. If you look at this feature alone, over half of the remaining masks are eliminated. Next, notice that it has a bone through its nose and its eyes are big and green. Go through the figures with wavy yellow hair and look for something that matches. As you go through them, you'll notice that there are no matches, so you can eliminate this mask as a possibility.

When you've correctly matched three figures, rectangles of the same color will form around them. This separates them from the rest, meaning that there will be three less figures that you have to examine. So the puzzle gets a little easier with each set you find.

If you manage to find all 5 sets of 3 figures, you will be awarded with a small gold key. Grab the key from the totem pole and use it on the bookshelf in the back of the room to open the bookshelf puzzle.

It seems as though someone has misplaced all of Dr. Brain's books. Either the maid couldn't speak English or she just hadn't recently brushed up on her Chinese Gods. Either way, it's up to you to get them straight. Mouse over the books with letters on them to see what their subject is. Then move each subject to it's proper category, labeled on the shelf. Listed below are the possible subjects and their corresponding categories:

As the last book is set into place, the book's covers disappear and the bookshelf slides aside to reveal the secret back room. Upon stepping inside, you find that among the eclectic assortment of interactive decorations is an elevator and a drinking fountain. It looks like Dr. Brain's giving you a refreshment break! Let's see here, what are the choices? Water, alcohol? and... mercury? What?! Is Dr. Brain trying to poison you? No, of course not, it's just his counterweight puzzle. Slip on your gloves and fume mask and jump right in. 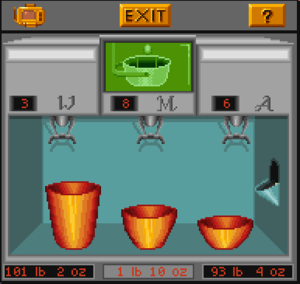 The object of this game is to pour exactly enough liquid to equal the weights at the bottom using only the measurements and liquids given. The red number next to the liquid's symbol shows how many dispenses this liquid has. It doesn't matter if the amount of liquid dispensed is an ounce or a gallon, it will only distribute liquid this many times. If too much is weight is added to any one of the three compartments, the whole thing drains and you must start over with a different set of numbers. With only a limited amount of liquid available, the challenge here is to make sure that you make the most efficient use of what you are given.

On Novice and Standard levels, each of the weights will correspond to one of the liquids, although not necessarily the one it is under. What this means is that only one liquid will be used per weight. More often than not, the heaviest weight will correspond to mercury, the second heaviest to water, and the lightest to alcohol. In these cases, once you have identified which liquid goes with which weight, add the largest container of that liquid that you can without going over. When you can't add any more of that size, start adding the next size down until the numbers magically get to 0 pounds and 0 ounces.

The Expert difficulty of this puzzle is an entirely different game. First of all, each of the weights at the bottom will need to be reached using more than one liquid. Additionally, if too much weight is put onto one side of the counterweight, the thing will tilt and spill over. If this occurs, the game will restart with new numbers. This means that you can't just focus on one weight at a time. 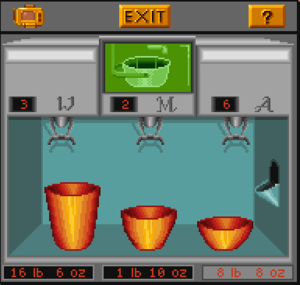 The first thing to look for are the weights that require mercury. These are fairly obvious, as the mercury is ridiculously heavy. A quart of mercury weighs in at 28 pounds, 4 ounces and a gallon weighs a whopping 113 pounds! That's slightly heavier than the average couch. Anyway, you will probably never need to use the gallon of mercury. If a weight is 30 pounds or more, add quarts of mercury until it drops under 28 pounds. Remember that if you add too much weight to the side of the counterweight, it is prone to spilling. Thankfully, these weights usually come in pairs on the left and right side. See the picture above for an example of this. If this is the case, you will have to go back and forth adding to the left and right to keep the counterweight from tipping over. Once all weights are below 28 pounds, there is likely little mercury left. To determine which weights need cups of mercury, check the ounces. Ignoring the pounds, you want the ounces to be even. Any weight that has an odd number of ounces will require at least one cup of mercury. Once this is achieved, if any of the weights are over 14 pounds and you have at least 2 portions of mercury left, go ahead and add 2 cups of mercury to that weight. In the example shown, notice the weight on the left. The ounces read "6", which is even, but there is 16 pounds left. With two cups of mercury, the weight drops to 2 lbs, 4 oz. 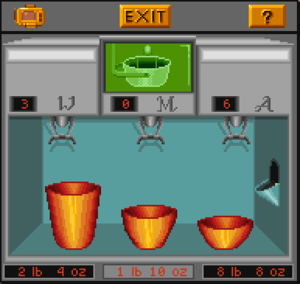 When the mercury has run out, all you have to worry about are the water and alcohol dispensers. Look at the chart above that lists the weights of each volume of each substance and take notice of the ounce possibilities of water. Any give volume of water will add 0 or 8 ounces. This means that unless the weight left has either 8oz or 0oz, water alone will not be able to get it to 0 exactly. Therefore, any weight that does not have 0 or 8 for the ounces must be given cups of alcohol until it does.

There are multiple solutions to this puzzle, and there may be some liquid left when all of the weights reach zero. Once all of the ounces read 8 or 0, there are a number of different paths possible to the solution. At this point, you are on your own. There are several general rules of thumb that can help you, such as if the pounds is odd and the ounces is "8", add a quart of alcohol to get an even number for the pounds and 0 for the ounces. 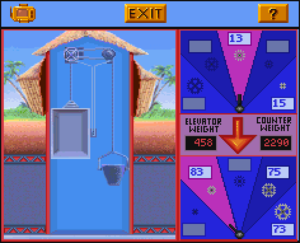 When you have found the two gears that are in the correct ratio, click the red arrow in the center to test the elevator. If all goes well, the elevator will run smoothly down the shaft and grant you access to Dr. Brain's underground laboratory.