The Island of Dr. Brain/Laboratory

At the bottom of the elevator lies Dr. Brain's laboratory, complete with tesla coils, robots, and genetic experiments on aliens. Dominating the center bottom of the screen is a human size robot, and the subject of the next puzzle. 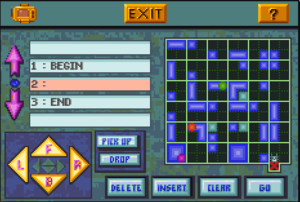 Insert one of the cartridges into the robot to start the robot puzzle. There are two action commands as well as four directional commands. The four buttons below the map are used to move commands around on the command list. The map itself has several different symbols. The blue rectangles are walls, the blue-green squares cameras. The cameras function the same as the walls unless the yellow cartridge is being used. In this case, it is best to avoid the cameras entirely. The three colored circles represent the objects that the robot needs to retrieve. There are four directional buttons. The "L" and "R" buttons make the robot turn clockwise (right) or counterclockwise (left). The "F" and "B" buttons make the robot move forward and backward. One forward command will make the robot move one dotted square ahead on the map. For instance, the first few moves for the example map show would be forward, left, forward, forward, right, forward, etc.

If you're programming with the green chip, be wary of lines that have a robot arm symbol on them. If a command line has a wrench on it, the robot will do the opposite action. It will start every other line, but will soon change to other patterns. If you get lost, there's no penalty for hitting the "Go" button before the programming is complete. Even if the robot is holding an object when the program stops, it will go back and return the object at the end of the sequence. If you're confused beyond all hope, you can always clear the entire system by hitting the "Clear" button.