The Island of Dr. Brain/Mountain

You climb your way up the winding mountain path, only to find that at the top, the bridge is out! Well, most of it anyway. As much as you would like to cross the bridge, you'll have to patch it up with some boards first. So where are we going to find these boards? That sign looks like it is made of some sturdy boards. Click on the sign to begin the cipher puzzle.

The object of this puzzle is to recreate famous quotes from what is given to you. What you are provided with and how you need to manipulate them depends on the difficulty level. Strategies for each difficulty are listed below, but if all else fails, you can usually find the answer pretty easily if you google the speaker and two or three of the words.

On novice level, there are two types of puzzle. In the first type, all of the letters and punctuation are in the correct order, but the spacing is off. For solving these ciphers, the first step is to erase all the spaces. To do this, click on the 'Delete Space' button, then on the spaces themselves. When the spaces are gone, read through it and see if you can figure out what it says without spaces. Most of the time, it will be obvious enough, but sometimes, there are runs of letters where the spacing is not so obvious. In these cases, put spaces in where you know they should be by clicking on the 'Insert Space' button, then on the letter after the space. When you have placed all the spaces you know for sure, experiment with what is left until you get it right.

The second type of cipher gives you all the words and punctuation, but rearranges the order. The first move here is to find the first and last words. The first word will be the one capitalized. If there are two capitalized words, either there are two sentences or one is a proper noun. The common noun will be at the beginning of the sentence. The last word of the phrase will be the one with a period or exclamation point at the end. The rest can usually be determined with logic. See the example below:

There are two types of standard ciphers. The first will employ a combination of the two types of novice level ciphers. The words will be rearranges and the spaces will be changed. The first step is to separate the words correctly. To do this, delete all the spaces, then add them between words. See the first type of novice cipher above for more details. Once the words are separated correctly, they still have to be put in order. For advice on this, see the second type of novice cipher above.

The second type will have the words correctly spaced, but the letters of each word will be scrambled. If this is the case, don't mess with the spacing, or it will make unscrambling each word that much harder. Take each word individually and solve the shorter, easier words first. When the phrase begins to become clearer, use context clues to help figure out what the harder words are. Remember, the words are already in the correct order, they just need to be unscrambled.

The expert difficulty employs the same encryption techniques as standard level, but usually have longer or harder words to unscramble. Keep in mind that words like "are" could also be "ear" or "era". If you don't win the game with a configuration that makes sense, try moving words around. "The income tax has made more liars out of Americans than golf" could also be "The income tax has made liars out of more Americans than golf."

With the planks in place, you can now cross the bridge. Click on the large white sign to enter Dr. Brain's giant green afro, where his botanical garden can be found.

The object of this puzzle is to find all of the animals camouflaged into the background. To find them, look for the general shapes of animals or lines that don't quite flow with the background. When you've found one, click and drag the mouse to form a box around it. If what you see is an animal, it will come out of hiding. If it is not, the box will turn red, then disappear. Even if you do spot an animal, it may take a few tries to get a box around it that the game accepts.

If you still have one or two left, but you've looked all around and can't seem to find anything, try making small boxes all around the page until Dr. Brain informs you that you are getting a bit warmer. Alternatively, compare your botanical garden with the one below which contains no animals and look for small discrepancies between the two. 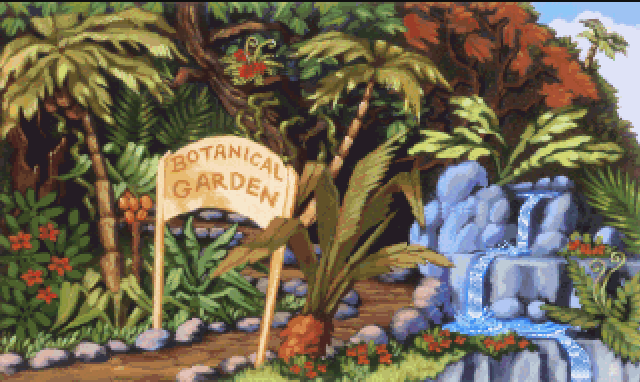 As you exit the gardens, a yellow bag suddenly appears in the middle of the clearing. The programming team must have gotten tired of making plausible segues. At any rate, pick up the yellow bag by clicking on it and use it on the door that leads into the volcano. 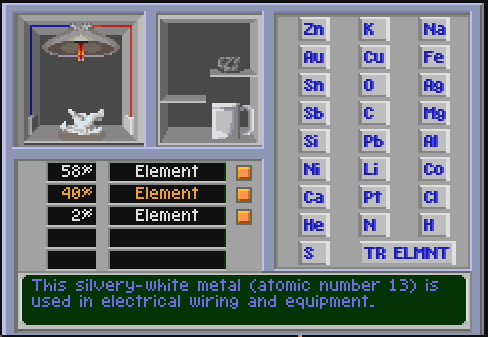 The object of this puzzle is to determine the elemental makeup of given objects given a short description of each. On each difficulty setting, you are given three random objects. Grab one item and place it under the analyzer on the left to see what each object is made of. As the object is analyzed, a list appears below with a description of each element contained in each object and its proportion. To read the description of an element, click on the yellow button below the analyzer. You will get a short description of the element which will include the atomic number or atomic weight depending on the difficulty setting. If the analyzer mentions something about the element only being present in minute amounts or not being able to trace them, then this percentage is made up of trace elements rather than any one element.

Use the table below to help figure out which element is being described.

When you have correctly identified all three objects, the door into the volcano will open. Don't worry, it's completely safe- I'm sure the doctor knows exactly what he is doing...