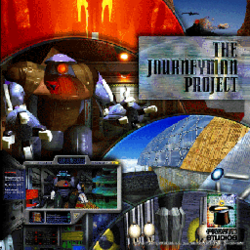 The Journeyman Project is a time travel adventure game developed by Presto Studios. Its publication was aided by Bandai and Sanctuary Woods. It was released in 1993 on Mac OS and Windows.

The game takes place in the distant future, after the Earth has been united to a peaceful global community. A scientist has discovered the technology of time travel but because of its dangerous nature, the prototype machine, 'Pegasus', has been placed under government supervision and further attempts at traveling through time or developing time travel technology are forbidden by law.

The game begins as humanity welcomes the first alien delegation to visit the planet, and prepares to answer positively to an invitation to join the interplanetary "Symbiotry of Peaceful Beings". During the induction ceremony, the government-operated Temporal Security Annex, which was established to oversee the lock-down of the Pegasus machine, detects three temporal disturbances that have altered the timeline; the Annex mobilizes Agent 5 to correct the disruptions, which have altered the timeline so that Earth's meeting with the Symbiotry representatives is one of mutual distrust and aggression rather than cooperation.