The King of Fighters XI 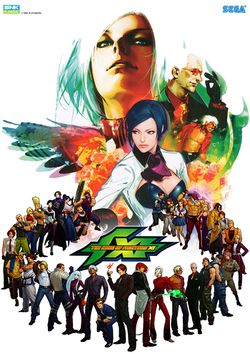 Set after the events of The King of Fighters 2003, the story focuses on a group known as "Those from the Past", who aim to obtain the power of the ancient demon Orochi. The player can choose from a total of forty characters, including characters from other SNK games; in the PlayStation 2 port, this includes characters from the crossover game NeoGeo Battle Coliseum.

The four most substantial innovations in The King of Fighters XI are Quick Shift, Saving Shift, the Skill Bar and Dream Cancels. The Power Stocks that existed before are still present, and are filled through encounters within fighters. There are now Skill Stocks which gradually build up over time. Each team begins a match holding the maximum of two Skill Stocks. Offensive maneuvers, such as Desperation Moves, Guard Cancels, and Tag Attacks, continue to use Power Stocks; however, more defensive or tactical maneuvers, such as Guard Evasion, Saving Shift, and Quick Shift, use Skill Stocks.

Should the timer run down during a match, the winner is no longer decided based on remaining life; instead, the judgment bar, a new circular bar composed of two colors, each one representing a player, quantifies each player's skill. If none of the two teams manages to win by defeating all three characters from the opposite team, the placement of the judgement bar decides who the victor is. The judgment bar is affected by each attack in which the players are involved. Combos affect the bar more, and when a character of the opposing team is defeated, the bar changes significantly against that player. On the rare occasion when the bar is exactly in the center, the match will end in a draw and both sides will lose.

The PlayStation 2 port added multiple modes not present in the arcade version. The player can use the original The King of Fighters team mode where characters are not tagged and instead fight in an order decided by the player. In Challenge Mode, the player is given multiple missions where they can unlock the bosses and a total of seven characters from NeoGeo Battle Coliseum. There is also an Edit Mode, where the player can alter the appearance of each character and give them different colors such as making Kyo Kusanagi shoot green flames instead of red.