The King of Fighters XIII 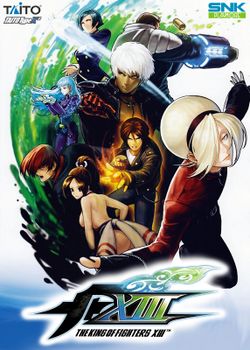 On April 22, 2010, Famitsu reported the addition of two new characters to the game: Vice for Iori Yagami's team and Takuma Sakazaki for the Art of Fighting team, and the following day Hwa Jai from Fatal Fury: King of Fighters was confirmed to be in the game as the final member of Kim Kaphwan's team.

The game was ported to the PlayStation 3, Steam (as The King of Fighters XIII: Steam Edition), and the Xbox 360.

The game takes place after The King of Fighters XI. The fighter Ash Crimson has absorbed the powers from two of the descendants of the clans who sealed the Orochi away 1,800 years ago, Chizuru Kagura and Iori Yagami, while Kyo Kusanagi is to be his last victim. As Elisabeth Blanctorche prepares to stop Ash, fighters receive an invitation to another King of Fighters tournament hosted by a person labeled as "R".