The Legend of Zelda/Underworld/Quest 1/Dungeon 9 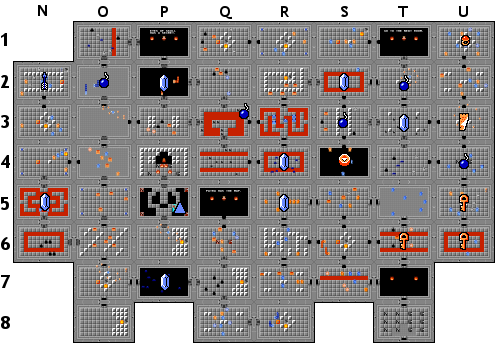 You should accomplish five objectives in this order:

To enter this dungeon, find the entrance at Spectacle Rock. Many of the rooms in this dungeon are unnecessary to enter, or have one way doors, so this walkthrough will focus strictly on the rooms that are necessary.

The dungeon can be divided into four parts. These are interconnected by underground passages only (except for a one-way door that sends back from part 3 to part 2).

Hints from the old men

Get the map, Red Ring, and compass[edit]

Return through the bombed pathways two rooms above where you got the compass. Return to the room with the very first Patra (if you went for the ring). Unlock the door above and listen to the advice of the man within by bombing the left wall. Defeat all of the Wizzrobes in the left room, and push the left block to reveal a stairwell.