The Legend of Zelda: A Link to the Past/Dark World

Mysterious Monuments
Pyramids are huge stone structures with square or rectangular bases and triangular sides. They were built as tombs for royalty and often contained precious treasures.

Once known as the Golden Land, this mysterious region was transformed into a world of darkness by Ganondorf Dragmite (a.k.a. Ganon) when he captured the Triforce and turned its power to evil. In the Imprisoning War, Ganon's attempt to conquer the Light World was foiled. Ganon was sealed inside the Dark World, but his shadow was never completely lifted from Hyrule. The time has come for one hero to enter the dark domain and confront the menace once and for all. 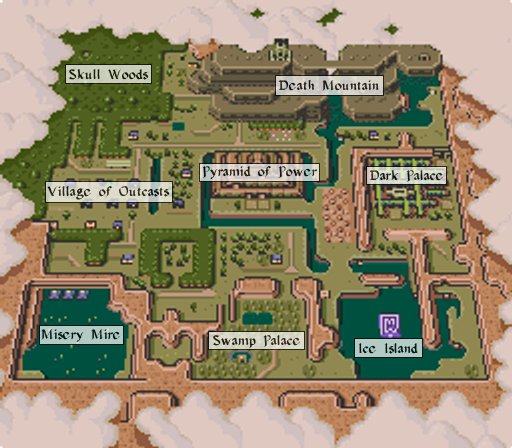