The Legend of Zelda: A Link to the Past/The Great Swamp

Stone faces rise from the tall, reed-like grass in Hyrule's south central Swamp. No one knows who carved the statues, but they resembled etchings left by the early Hylians. The tall grass hides other things, too, making it dangerous to walk through the area. 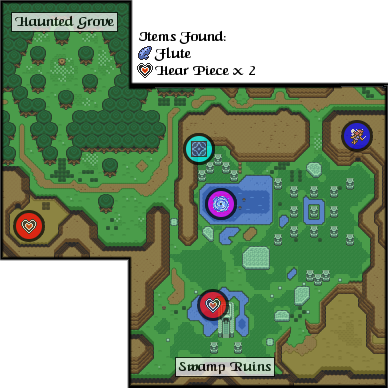 Few people dare to wade through the dank grasses in the Swamp region. They are known to hide armed soldiers and land mines. No one built homes in the area, and the Swamp Palace, which was once grand, frequently flooded and was left more or less in deserted ruin. Despite its inhospitable environs, you should explore it thoroughly.

The Swamp Ruins reveal little about the people who must have lived in the area at one time, but there are two switches on the wall of the room inside. One switch controls the water flow, and the other releases a rain of Bombs. Historians surmise that the civilization must have cultivated the crops and practiced an early form of irrigation.

The Haunted Grove north of the Swamp spawns many strange stories. One claims that animals gather around a ghostly form who plays haunting music on a flute. The form fades, the music drifts off, and the animals scattered when humans entered the grove. If you can solve the mystery of the grove, the ghost will no longer appear.

The long way around is healthier[edit]

Now that you have the Pegasus Boots, You may opt to travel all the way around Hyrule Castle before arriving at the Great Swamp. With these boots, you will have access to another Piece of Heart that you could not collect before. There are a pile of rocks on a cliff just to the left of the Sanctuary (you must approach them from the west). Get a good dash going, and knock the rocks away to reveal a stairwell that leads to a

Piece of Heart. (And if you haven't done so already, you may also choose to head into the Lost Woods to collect another easy Piece of Heart and a Mushroom.)

On your first trip to Kakariko Village, you probably noticed a man standing in the path outside a house filled with chicken. If you approach the fellow, the man will run away. After winning the Pegasus Boots, you can catch the running man and make him talk. He will teach you how to knock items out of trees using the Dash Attack.

The book on the shelf[edit] 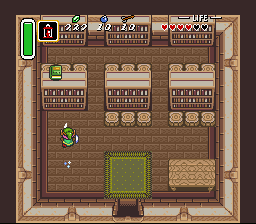 Dash into the bookshelf to collect the book

If you visited the House of Books in Kakariko Village, you may recall a single book with a green cover that lay out of your reach on top of a bookshelf. Now that you've finished the Eastern Palace and received the Pegasus Boots from Sahasrahla, you should return. Using the power of the Pegasus Boots, execute a dash attack against the bookshelf, and the impact will knock the book to the floor. Pick it up to receive the

Book of Mudora, which can be used to translate ancient Hylian texts.

The beasts of the Haunted Grove[edit] 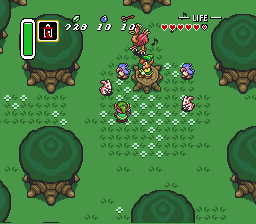 The concert won't last if you get too close

If you explore the Haunted Grove, you will find one of the strangest sights in all of Hyrule. A ghost-like boy sits on a stump playing a flute. Surrounding the boy are a host of animals. If you approach, the animals will run away and the boy vanishes. Try as you might, you can not talk to the boy or catch the animals, even with your items. Some time in the future, you will have the opportunity to discover the mystery behind the Haunted Grove. 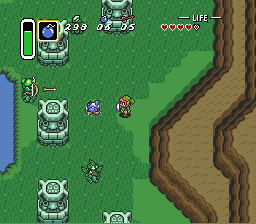 Get the best of an enemy

In the Great Swamp region of the Light World, you will find many foes hiding in the tall grasses. One of the inhabitants of this region is a jumping hare that hoards items. If you cut the grass beneath a hare when it jumps up, depriving the creature of a place to hide, you can capture it. Once caught, the hare will give you all its worldly belongings, including Rupees and other cheap items. Later on the game, these hares will disappear, so take advantage of them while they are still around.

The gratitude of a fish[edit] 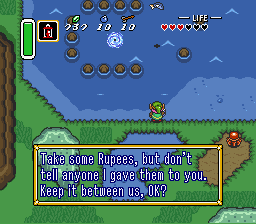 If you enter the Swamp Ruins and pull the switch that allows the water to flow, when you exit you will find that the ponds outside have been drained. When you do this for the first time, you will happily discover a

Piece of Heart in the shallow puddle. One of the fish from the pond will flop wildly about in the mud. Take pity on the creature, pick it up, and carry it north to the small lake. Throw the fish into the water, and the grateful fish will give you a gift of Rupees.

Journey to the Desert of Mystery[edit]

Another Tile
Another strange tile was discovered behind the columns in the north. Having heard of disappearances in other areas, the people covered it with a large stone to keep someone from accidentally stepping on it.

Once you finally claim ownership of the Book of Mudora, you are prepared to journey into the Desert of Mystery. Of course if you choose, you may also investigate the sights that are to be had over by Lake Hylia before you visit the desert. The choice, as always, is yours.