From StrategyWiki, the video game walkthrough and strategy guide wiki
< The Legend of Zelda: Four Swords Adventures
Jump to navigation Jump to search

The main characters and heroes of this game. When Link gets his hands on the "Four Sword" Our young green friend becomes Four of a different color, Green, Red, Blue and Purple.

The princess must have her mind on other things besides being captured yet again, Our young hero must rescue her and fight have her help them out with the evil Ganon. 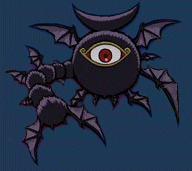 Vaati, the evil sorcerer of the wind. He obviously doesn't know when to quit. Only this time he has extra backbone with the evil Ganon to back up his evil plan. 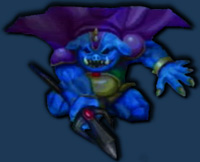 Ganon..Is there anymore i have to say about him. Anyone who has ever played a LoZ console game should know about Ganons Evil plans to rule the land of Hyrule. Our Four Links must defeat this evil being to save Hyrule from a dark future.

Dark Link.. or Shadow Link. Perhaps the most loved evil villain in the series.( Currently Referred as Dark link here in this guide on SW). In previous console games DL did everything you did, but he's a bit different in this game. But watch out for his big bombs

Tingle.. How annoying, even though he might of had good intentions in Wind Waker, here in Four Sword Adventures, all he wants is to steal the force gems you work hard for... to become a Fairy? Yeah, this guy is pretty messed up in the head.