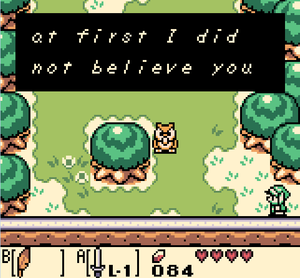 When you finally beat dungeon 1, you'll get a vision saying that a path opened in The Swamp. After the vision you wake up in front of the Tail cave gates. Go west one space for a meeting with the Owl.

The Wise Old Owl tells you that he could not believe you were real until you got the one 8 special instruments of sirins and that you are going to have to collect them to be able to wake the windfish and get off the island. He gives you a special hint he tells you were the next instrument is located.

Before you can get to Dungeon 2 in the swamp. There will be a chain of events that will need to be done first before you will be able to even enter dungeon 2. 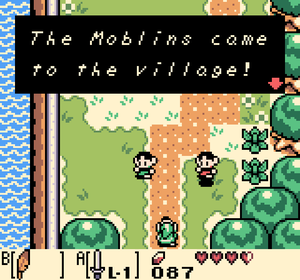 When you return to Mabe Village, the two kids that were originally playing catch will run up to you telling you about the crisis afoot they tell you to head to the madam meow meow's house. Talk to her and she'll tell you that a bunch of moblins stole her prize Bow wow and asks for someone to help.

The piece of heart, which you can now reach

Now that you know who is responsible for the kidnapping of Madam Meow Meow's prized Bow wow. Refill your hearts before trying to locate the Moblins. Head to the mysterious forest to the north, and reach the exit in the north-east corner. When you leave the forest on the other side, you should find a field of holes surrounding a piece of heart, which you can collect with the Roc's feather. Jump north, and turn towards the right. The cave next to the owl statue is the Mobiln's cave.

There are three rooms standing in your way of BowWow. The moblin guard in the first room will alert all the moblins that an intruder has enterd their hide out. Go through the chambers slaying the Moblins in each chamber until you get to the boss Moblin.

Another short speech before your final battle with the moblins. This is sort of tricky, but can be done in one of 2 ways:

When he is defeated, you can proceed to the next room to retrieve BowWow. Although a short-term companion, he can quickly swallow any enemy that comes too close.

Go east one screen then you will meet the Owl one last time before you go to dungeon 2. He will remind you that you need to get the second instrument, in the swamp. To reach the swamp, head to the north-west exit of the mysterious forest, where you first found the Tail key.

When you approach the entrance of the cave, BowWow will quickly eat the Goponga Flowers that surround the entrance, allowing you to enter the Bottle Grotto.