Since you completed Bottle Grotto, you don't need BowWow to continue the quest. If you keep him around, he can still help you in combat, or help detect the locations of Secret Seashells, but neither Richard nor the monkey will help you.

Exit to the right, and find Richard's Villa. He gives a quest to find the Golden Leaf in the castle. There's five leaves to find, and you'll need to get a shovel. Purchase it from the store if you haven't already.

You will also need to start on the Trading Sidequest. get the Yoshi Doll from the store and trade it to the northern house for a ribbon. The ribbon is given to the chain-chomp puppy for Dog food. The dog food is then used to purchase bananas.

With the bananas, you can head to the castle. The moneys will build a bridge for you, to the right of the castle. In addition, you will receive a stick for the trading sidequest.

Continue north, and turn west. Slash the bush, and continue underground into the castle. There are five leaves to collect:

Return to Richard, and he will open a passage for you. The passage leads to the pothole maze, which you gradually reveal by cutting away the shrubs. There are diagonal shortcuts available if you want to speed through it. At the end of the maze is an owl status overlooking some grass. Cut the grass, and dig in the empty spot to get the key for the third dungeon. 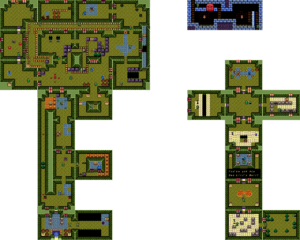 Map of the Key Cavern

You may now explore the key cavern proper. In the first room, pickup a pot, and throw it against the northern door. Continue north, defeat all monsters in the room, and get a small key. Since the west path is blocked, take the east path. The doors will close, forcing you to defeat all monsters in the room to continue (excluding the one in the chest).

Continue north, until you reach a staircase. when you head down, you should be in a room with four locked doors. Of those four doors, the west and south passages lead to dead ends, but you can obtain a key if you defeat all monsters within the room.

If you take the northern exit in the 4-way, you will see a crystal that you can strike. When you do, you may now access the chest just before the staircase, which contains the Owl Beak. You can head two screens south and one screen east to also collect the Map of the dungeon.

Taking the east route opens a room with a conveyor belt, with stairs at the end. Climb up the stairs. Within this section, you will need to collect enough keys to reach the nightmare. In the first room, you will need to find all hidden Zols and destroy them to get the key. Continue north, and head left. In this room, you need to defeat all enemies to unblock both doors. If you have sufficent bombs, you may head north to the miniboss; otherwise, continue west.

In the southwest room, you will be attacked by two Pairodds. You can defeat them for another small key, although doing so may be difficult without the pegasus boots. However, you can place a bomb at the point they will teleport and approach them to destroy them. Defeating them should release a key. Continue north for two rooms, and grab the bomb pickup. You may now return through the stairs, and proceed to the miniboss.

The miniboss are two Dodongo Snakes. To defeat one of them, you need to place three bombs in its mouth. To defeat both, you will need six bombs, although a quirk allows you to only defeat one snake and leaving the room to destroy the second. When they are destroyed, you can proceed right to collect the Pegasus Boots.

With these boots, you can backtrack to the beginning of the dungeon, and head east. You can now run past the vacuum, and collect the small key. However, you will still need to continue to the east from where you collected the boots.

The arrow shows where you can place a bomb, which can be done later. Continue north, and defeat the bombites and other hidden monsters. Continue left for a compass and search for a breakable wall on the left (by tapping it with your sword) and blow it open. You should find another key.

Next, bomb the wall marked by the arrow. Use the boots and feather to jump over the gap, and turn north to obtain the nightmare key.

To reach the nightmare, head to the room south of the miniboss. Unlock the series of four gates using the keys collected. You will need to get past the spikes, which is performed by ramming the Thwomp to the right. When you get to the stairs, you can ram the Pairodds with the boots and sword to quickly defeat them.

Continue left. If you want to explore more of the dungeon (which is optional at this point), you can defat all the keese to release a key. otherwise, head north to engage Slime Eyes. It will first taunt you, saying that you can't see it. Ram the back wall to force it to fall down, then attack it with your sword. When it begins to divide, use the boots again to split it in half.

Once the eyes are separate, you can slash them to death. However, if one of them jumps high up, you will need to switch the pegasus boots with the feather to avoid being stunned when they slam against the ground. Once both eyes are destroyed, you may proceed north to collect the Sea Lily's Bell.