Link has a complete 72 hours before the world ends. Before it ends, you must warp back through time. 72 hours equal a total of three days and three nights spread evenly over 12 hours.

In-game clock at the bottom of the screen

The in-game clock at the bottom of the screen tells what hour and day it currently is. The diamond in the center will either say "1st", "2nd", or "Final" to indicate the day. When the diamond is green, time is flowing normally. Playing the Inverted Song of Time will slow time and turn the diamond blue, indicating that the flow of time has slowed down to 30% of its normal speed. A small yellow sun icon rotates around the diamond, representing minutes. The hour icon, represented by the outer larger icon, changes when the smaller sun icon makes one full clockwise rotation around the diamond. This icon is a sun from 6 A.M. to 6 P.M. and a moon from 6 P.M. to 6 A.M. When time is flowing normally, one game hour takes approximately forty-five seconds. Surrounding the day and minute indicator is the hour indicator, represented by a white semi-circle.

If you return to the dawn of the first day, your progress will be saved and all side quests and dungeon completions will be reset. The Song of Double time has the same effect that dancing with the scarecrow has. It can be useful if a certain aspect of a side quest only occurs at a certain time of day.

What is Saved and Lost in Time?[edit]

The Song of Time, however, can't save everything. Many things Link obtained will be lost and have to be found again.

Things that will be saved[edit]

Things that will be lost/reset[edit] 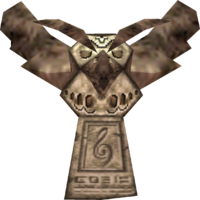 If you need to take a break but don't want to restart from Day 1 when you come back, you can save using an owl statue. To activate one, slash it with your sword, and it will activate by glowing, then spreading its wings. After you have activated it, you will be able to save the game at that point. The save feature allows you to save all progress up to the point and quit the game. When a file saved this way is loaded, the saved game will not be in the game's memory anymore; if the system is turned off, the saved game will no longer be there.