The Legend of Zelda: Oracle of Ages/Sea of No Return and Ancient Tomb

When Link comes out of Jabu-Jabu's belly, the Maku Tree reveals (during Zelda's age) that she is unable to sense the last Essence of Time. Check the map during both ages: all is left to explore are the inner part of the Sea of Storm and, during Ambi's age only, a large area east from Lynna Village. The conclusion is obvious.

As soon as you leave Jabu-Jabu's shrine, a Zora grants you the

Zora Scale, a badge of heroism for all the Zoras.

In Lynna Village, visit the mayor's house. Use the L-2 Switch Hook to get a

Linked game: Hero's cave
(If you already cleared Oracle of Seasons and linked to this game)

During Zelda's age, enter the cave just south-west of the Maku Tree. The Hero's Cave can only be completed after you collected the treasures from seven dungeons.

Every room is a different puzzle with a single exit door. This is very reminiscent of the Eggerland series.

You can now claim the

Quicksand ring (n.36) will be useful in the dungeon. If you are playing a linked game, the

Linked game: Zelda's age
(If you already cleared Oracle of Seasons and linked to this game)

Thanks to the Zora Scale, you will be allowed to access the Sea of Storms during Ambi's age. Find a

Pegasus Ring underwater, as well as the

Tokay Eyeball, that is on the pirate ship. 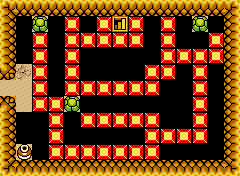 Use the Roc's feather to make shortcuts.

Travel to the Moonlit Cave during Ambi's age. The Tokay Eyeball is the key to open its mouth. Inside, your Power, Courage and Wisdom will be tested in three rooms.

After the three tests, an underwater passage leads to the entrance of the Sea of No Return.

Emerge from the water, and push one statue so that the three are aligned; the entrance to the Sea of No Return will then be revealed.

Even if it looks like a complicated maze, the dead-ends are short, so that it is actually a windy path. Orienteering is secondary: the main difficulty here are the Lynel centaurs. Navigate the path, and you will eventually reach the entrance to the Ancient Tomb.

The first room is empty, as usual. In the next one, light the fireplaces with Ember Seeds, but apparently there is no exit; the Owl Statue suggests to test the walls with the sword. Check the map: there should be a passage on the west wall; push a statue, and place a bomb to open the way. More bombs allow to reach the chest with the 1st

Small Key. Use it to open the door and proceed.

In the next room, activate four switches in four different ways: shoot an Ember Seed on the brazier, use the Long Hook to move the diamond on a button, use the cane of Somaria to press another button, and stand on the last button. The passage to the lower floor will then open. Downstairs, follow the only possible path. In the room with Ghini ghosts, push the central block to reveal a staircase. Descend it, and you can get the

Return to the previous floor and continue along the only path, to the north. Open the chest for the 2nd

Backtrack to the first room of this floor, and use the key to unlock the key block. Continue along the path. The room with the Ghinis has two exits: north and west. Go north first, and hit the blue crystal: all blue barriers will go down and the red ones will rise. Backtrack and take the west fork. Now the chest is accessible; open it and claim the

Now that the blue barriers are down, backtrack all the way to the north-west and continue. Defeat all the Stalfos skeletons and claim the 3rd

Continue south. Press the button to make a stair appear. The wheel sends you west again, so take a little tour around and come back from the north to go east. There is a locked door north, but for the moment keep exploring this floor; go south, enter the wheel to go west, take a tour and re-enter the wheel to go east. Another locked door leads to a tile-path puzzle room. When you solve it, you can claim the

Power Glove, that is the L-2 upgrade for the Power Bracelet.

Backtrack to the first room of this floor and continue east. Get in the two wheels repeatedly, until the southern one sends you south. From the Ghini room, go north and hit the red crystal: the red barriers will go down. Take a tour south and walk on the "red barrier passage" that is now open. Use the Power glove to lift the blue coffin and open the chest for a

Bomb the cracked south wall and proceed (the blue block must be pushed sideways, later). Only the combination of Pegasus seeds and Roc's feather allows to dodge all the blade traps. Open the chest and get the 4th

Now you can access the last three rooms on this floor (check you map). The Long Hook allows for some shortcut. In the first room beyond the locked door, use the Power Glove to open the way. In the last room, stand on the lowered red barriers and hit the nearby crystal any way you like. Now, walk on the red "highway", jump with the Roc's feather, and continue all the way west to the staircase down. Follow the only possible path, and you will reach the miniboss.

The Big Stalfos reminds a bit of the final boss in the previous dungeon: it must be damaged by its own projectiles. This time, use the sword and "play tennis", i.e. send back the magic spheres. When the Big Stalfos gets hit, it turns temporarily into a winged skull, that is vulnerable to your regular sword attacks.

Leave the mini-boss room to the south, then continue west. This room has two exits; check the map: let us complete the north-west portion of the floor first, so let us go west. Follow the only possible path, using the switch hook. In the Spinning Blade Traps room, equip the Roc's feather and jump over them. Open the chest and get the 5th

Small Key. In the next room, open the chest and get the 1st

Leave this room to the south, pass through the empty mini-boss room, then at the fork go south. This "room of the seal" has two exits, too; check the map: let us explore the smallest portion of the floor first, so let us go west. In the lava room, ignore the lever (it opens a path that simply brings you back), but use the 5th small key to unlock the keyhole block and continue west. Eventually, you will reach the room with the 2nd

Leave the 2nd tablet room to the north and continue east (if you jump off the ledge in the lava room, you simply go back). Use the Power Glove to lift the blue coffins: find the staircase and go downstairs. To your left, push the blue blocks and use the Switch Hook to reach the chest with the

Boss Key. Continue east, climb the stairs, push the coor cube on the traffic light spot and open the passage. Backtrack to the four coffins room and continue east and ride the cart. In the next room, use the shield to parry all the flying tiles, then open the chest for a

Gasha seed. In the next room, equip the Roc's feather and dodge all the Blade Traps. Step on the button, and a new passage will open. Continue and eventually you will reach the 3rd

Leave the 3rd tablet room riding two carts, then continue north. The Candleheads can only be defeated with Ember seeds. In the next room, climb the stairs and prepare for an underwater session. The Owl Statue gives a hint about the stone tablets. Equip the Quicksand ring, if you have it, and navigate the underwater currents. Descend the stairs, go west, then emerge in the room with the 4th

Leave the 4th tablet room, but this time explore the "platform passage" all the way west. When you emerge, press the nearby button, then go west and south to the "room of the seal". Insert the four stone tablet in the four slots, and the gate will open. Descend to the bottom floor. Four items will clear the way to the boss room: remove the crystal, bomb the cracked block, light the brazier with an Ember seed, and finally lift the coffin with the power glove. It is time to fight the boss!

Every phase has three hit points.

When Ramrock is defeated, collect the

Heart Container and proceed to the next room to get the last Essence of Time, the

"The eternal light of this heavenly body acts as guide to the other essences."

(Actually, the light of a falling star is far from eternal: it lasts less than a second, then the heavenly body is completely destroyed.)