The Legend of Zelda: Oracle of Seasons/Arrival 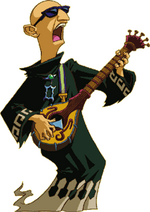 The Triforce calls upon Link

Link and the Oracle of Seasons dance together

The Temple of Seasons sinks underground

Link, a hero from the land of Hyrule, has seen much evil appear in a short time. Not long ago, his destiny changed, and he became a mighty force of good, defeating the Evil King Ganon, rescuing Princess Zelda, and restoring peace to the kingdom of Hyrule. Ganon sought out a force, that of the Triforce, and could not obtain it all. Instead, that very force was split into three parts: Power, Wisdom and Courage. One of those parts, Courage, is within Link. Another, Wisdom, lies in Princess Zelda. Ganon held the last force, Power, but it was lost upon his demise. However, a mysterious new enemy is about to make themself known, and could very well bring the force of Power back...

Link, the Legendary Hero, is called by the Triforce to Princess Zelda's castle in Hyrule. The Triforce warps him to the land of Holodrum, where he lands unconscious. He is discovered by a dancer named Din and by Impa, another envoy from Princess Zelda.

Short after Link wakes up, General Onox of Darkness crashes in like a tornado, knocks everybody off and abducts Din. Even Link is helpless against him.

Then, he seals Din up and sends the Temple of Seasons sinking into the earth, wreaking havoc over all the land! The seasons are thrown out of balance, and Onox casts his destruction across Holodrum and beyond!

Linked game start
If Oracle of Ages has already been completed and linked to this game, Link will start with two extra items: the L-1 wooden sword and a 4th heart container.

After General Onox imprisons Din, Link finds himself awakening elsewhere. Impa asks Link to take a message to the Maku Tree in Horon Village. She is too injured to carry on the task herself, and she knows that Link is the Triforce Hero, because his hand bears the symbol of the Triforce of Courage.

Linked game:
Ring secret
If Oracle of Ages has already been completed and linked to this game, Link can get all the rings he collected in Oracle of Ages using the Ring Secret. First, switch to Oracle Of Ages, go to the jewelry and talk to the Red Snake: he will tell you a password. Then, switch back to Oracle of Seasons, go to the jewelry in Horon Village and tell the password to the Red Snake there. Your collection of rings will be copied into this game.

Two places of interest can be found in Horon Village: the first one is Vasu Jewelry, where Link will be given a L-1 Ring Box that allows him to carry (and use) one Magic Ring, after he will find any.

The second one is the shop; inside, there are three items available: some Hearts, which replenish health (10 Rupees), some Bombs (20 Rupees), and a shield (30 Rupees). If you want to buy one, you'll need to pick up the item you want and talk to the store clerk.

Anyway, you will find the Bombs for free in the first dungeon, and you can buy the

Wooden Shield for a cheaper price just before the second dungeon.

The door to the right is open only if you play on a Game Boy Advance.

In the north-west corner of the Village, Link can visit the hut of the Know-It-All Birds, that consist of an in-game tutorial. One last location is the Advance shop, that is open only if playing on a GBA (but not on a DS or 3DS); there, Link can buy three items for 100 Rupees each, but later, because he starts the game with no money.

Now, the real adventure has begun. You must now find a way to restore Holodrum from its state of frequently-changing seasons, and the first step is to deliver Impa's message to the Maku Tree.

Jump down from here, and avoid the Octoroks.

The way to the tree is blocked, so you can't go there yet. First, you must find a sword to clear the path. Head west through Horon Village, and you'll reach a small path that heads into the coast.

From here, go south. There is a shortcut you can take down to the coast from a ledge above. However, there are Octoroks to avoid along the way. You need a weapon to defeat the evil monsters like these you'll meet. Look for a cave entrance in the cliff wall near a dock. This is the entrance to the Hero's Cave.

The Hero's Cave is a sort of mini-dungeon, with very simple puzzles to solve. However, you can't defend yourself from enemies yet, so avoid them all. 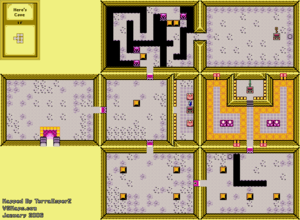 Map of the Hero's Cave

(Room 3) Push the left block south, and the right east.

(Room 4) Avoid the enemies and press the switch!

You got the Wooden Sword!

Jump down from here. This is a secret entrance.

You can now return to Horon Village.

However, before going to the Maku Tree, you can get yourself another item. On the way back to Horon Village is a small ledge above the Hero's Cave that leads to a secret room. Jump off the ledge, and you'll find yourself landing in the cave before a chest. Open it, and you get 30 Rupees. To get out, head left, push the block, and then go back to Horon Village.