The Legend of Zelda: Oracle of Seasons/North Horon and Gnarled Root Dungeon

Show courage by swinging your sword!

The Gnarled Key! What does it open?

Heading east across the village will bring you to the blocked path, which can now be cleared with the Wooden Sword. The sign by the gate says to show courage. Swing your sword in front of the gates, and you will be allowed to pass.

You'll arrive at the Maku Tree, a large, wise oak. However, he's asleep! You'll need to swing the sword again to pop the snot bubble of sap gushing out his nose. The noise will wake the tree and allow you to deliver the message from Impa.

The Maku Tree sees the chaos that has come because of Onox, including the scattering of the eight Essences of Nature, which has weakened him. He's shriveled to a much smaller size without the forces of nature to enrich his body.

Gnarled Key. This key is special, and only fits one particular lock. Fortunately, the Maku Tree knows where it is. He tells you to go to a giant root in the middle of the lake. What could be there?

Use the Gnarled Key here. The dungeon will open.

With the Gnarled Key, go to the giant root up by the lake as the Maku Tree said. It doesn't look like much, but there's a very peculiar keystone next to it. Go up to it and use the Gnarled Key.

Suddenly, the root rises up to reveal a large tree! And inside it is the entrance to the first dungeon: Gnarled Root Dungeon. 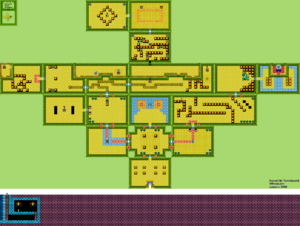 Map of the dungeon

His advice is important.

Defeat all four Stalfos and your reward is a Small Key.

As you enter the first room, head north into the next one. Once you enter, the doors will shut and you will find four peculiar blocks. The one on your top-right is movable. Push it to open up the doors.

Head north again to find a sage (in the same style as The Legend of Zelda 1). He will mention that you need to relight unlit torches. Remember that. You can't light any now, but there is an item in the dungeon that can. Head back into the block room and resolve the puzzle, then head east.

In this room are four Stalfos. Kill them all to get a

Small Key. With it, you can open one locked door in the dungeon. In fact, there's one nearby. Head into the block room again. This time, you don't have to mess with the puzzle. Instead, head west and unlock the door.

Defeat the second group to get the Dungeon Map.

In the next room are four more Stalfos. Kill them to open up the doors, and make a chest appear, which holds the

) will now show all the rooms in this dungeon. Darkened rooms haven't been visited yet. Now, you can keep track of your progress. There is also another helpful item in the dungeon. It's the companion to the Dungeon Map, but it's in another room.

Hop in the mine cart for a ride down the tracks.

Push the block, and avoid the spikes!

Head on north to the next room. Here, you'll face four Zols. They're not very strong. Slashing will split them into two smaller blobs called Gels, which you can kill easily. When they're all gone, you'll open up a door. However, it's only the door you came through. You can't head left, and the door ahead is shut, too, but there's a mine cart ahead. Run over to it, and hop in. You'll be taken for a ride down the tracks. The door ahead will open to let you through, and you'll ride a small track through the next room.

Several Keese are in here, but you can get rid of them with your sword if they bother you. The mine cart will go through another door, where the tracks will end. Now, you have two options: one, head up the stairs or two, head left.

If you head left, there are a couple of Moblins. These enemies throw boomerangs at you if they see you, but a couple hits will get rid of them. With them gone, there is a block nearby. Push it, and the door will open. Be careful heading towards it. Two spike traps will come after you. Lure them out, and wait for them to get out of your way. Beware; this isn't the last you'll see of them.

In the next room, there is a block puzzle. It seems confusing, but there are 4 simple steps to solve it:

Your reward is a Gasha Seed.

At the end of the puzzle, go up the stairs. You'll find a treasure chest waiting for you. Inside is a

Gasha Seed. With the puzzle done, head out.

If you head up the stairs, you'll find a path to the right. It will take you into the last room, but in a different place.

Go open the chest at the end of the path. You'll get the

Compass, the Dungeon Map's companion. This handy item will help you find keys hidden in the dungeon. Listen for a noise (four beeps) to find out if an object is hidden in the room.

Switch the tracks by hitting the switch.

There is also a lever up here. It can switch the tracks below. Hit it with your sword to move it. The track will switch over to a new path. Then, hop back in the mine cart.

This time, you'll travel into a new room and pass by a treasure chest. When the mine cart comes to a stop, go back and open the chest. The reward? Ten

Walk on the switch for the key!

Close by are some stairs. Go up them and head right again to find more stairs leading down a path. Here, you will encounter the Spinning Blade Trap, also known as a Chaser. It will chase after you if you come near it. Try to run past it before it gets too close. At the end of the path is a switch. Step on it to reveal a chest with another

Blow up this wall.

Once you get the key, go back the way you came, but don't take the stairs back down. Instead, head left to find a crack in the wall. Now, equip your bombs. Place one by the crack and let it go off. You'll blow open an entrance to another room.

The next room teaches you about spike traps. Make your way through carefully. Traps have freedom to go up and down or left and right if they can. There are places where you can dodge the traps if they get too close.

When you make it past all the traps, you'll reach a locked door. Open it, and get ready: here comes a mini-boss.

Focus on one brother, and avoid the boomerang.

The mini-boss is the Goriya Brothers. The two of them share a boomerang that they throw at you. It's tricky to avoid, but can't go very far.

It doesn't take much to defeat the brothers. Focus on one, and keep attacking him. The two are bound by fate, so when one dies, so does the other. When you've defeated them, a warp point and fairy will appear. Use the fairy to restore your health. Then, go into the next room.

Push the block in the left corner.

You got a Seed Satchel! And it has 20 Ember Seeds!

This room has several traps and a wall blocking a staircase. However, the block in the left corner of the wall can be pushed aside (in the same style as The Legend of Zelda 1).

When you venture down the staircase, you'll find a reward waiting for you: the

Seed Satchel. It can carry the many different seeds you'll acquire, and there's one kind already inside.

The Seed Satchel has 20

Ember Seeds in it. Ember Seeds set things ablaze, and these are just what you need to light torches.

Defeat the three Moblins to get the Boss Key.

Equip the Seed Satchel and head back to the miniboss room. You can push the blocks out of your way to get out. From there, step into the warp point. You'll return to the room where the mine cart was when you found it. Now, you have the means to light the torches, using the Ember Seeds. This will open the door. If you run out of Ember Seeds, don't worry. You can find more Ember Seeds by cutting grass outside the dungeon.

Inside are a few Moblins. Defeat them to make a chest appear. Inside is the

Boss Key. This key can open the big locked door to a dungeon boss's lair.

Light these torches, too.

From here, go back to where you got the Dungeon Map. Light the torches there, and a new path will open. Now, you'll navigate a maze full of Floormasters. Don't let them grab you.

A ring is hidden in the maze.

Inside the maze is a chest, and it holds a ring. You can appraise it later, and it will be the

When you fend off the Floormasters and make it through the maze, you'll reach the lair of the boss. Be on your guard, and go in...

The dragon will spit out three fireballs and try to ram you. However, he has one big weakness: the horn on his head. Slash away at Aquamentus's horn, and the dragon will fall in defeat.

The Fertile Soil is yours!

The reward for slaying Aquamentus is a

Heart Container. Grab it, and your health will be fully restored, and another heart will be added to it.

With the defeat of Aquamentus, go into the room to the right. Inside, you'll obtain the

Fertile Soil, the first Essence of Nature. "Seeds scattered across bountiful lands are nourished in this Fertile Soil!"