Head north through the first room. The camera will show a big bell. Push it forward and it will fall into a hole. Strike it twice. A door will open in the south-east. Enter it to find a block puzzle. Push it in this order.

The block is now in place, and you can use it as a bridge. Go up the small set of stairs, stand in the middle of the landing, and jump across the gaps. Go right and down. An enemy is standing in the pool spitting rocks across. Use the Whirlwind to blow one into the purple switch. This creates two bridges that you can cross. Go down the stairs.

Push the block straight to the right. It will fall into the water. Jump onto it and stand on it. Looking straight across, you can see a fan. Blow at it. This opens a blue door. Use the Whirlwind and blow towards the south-west. When you reach the ice at the other side of the water, jump off the block onto the ice. Go north and push this block into the water. If any enemies appear, blow the rocks they spit at you back at them. Jump onto the block. Blow to the right until a route to the north appears. Blow south then west towards the land, then jump off onto the ground. Go west. You're faced with some Ice Keese. Blow at them, then strike them with your sword to kill them. When all are gone, a large chest appears. Open it for the Boomerang! To use it, equip it on the Menu, then tap its icon in the top-right or hold

, then draw the path you want it to take. Go east and you'll see two switches on the other side of an abyss. Draw a path for your boomerang through both switches to create a bridge. Go up the stairs.

Go left. On the wall is the order in which you should hit the bells in the front hall.

Below this is a bell. Push it down then left. Go right. A switch is behind a wall. Draw a path for the boomerang to hit the switch. This opens a blue door. Push the block through it. Now you need to get the block into the slot. Push it in this order.

The bell will fall into its slot. Using the Boomerang, strike the bells in the above order. A door opens. Go through it. You see one lit torch, and five unlit torches. Send the Boomerang through the lit torch and around the other torches. Do this enough times to melt the snow and reveal the order in which you should light the torches. Light them in that order to open a door. Go down this set of stairs. Walk over to the edge of the water. You should see an Ice Flame. Send your Boomerang through it and across to the land on the other side. Cross the bridge this makes with the frozen water and open the small chest here for a Small Key. Open the locked door you passed by. To kill the icy enemies here, send the Boomerang through the flame, then through the enemies to melt the ice. To finish them, strike them with your sword. Go through the opened blue door. You see a frozen fan. Send the Boomerang through the torch, then towards the fan to melt it. Blow at the fan with the Whirlwind, then switch back to the Boomerang. Send it through the Ice Flame to the ground where the blue door just opened. In this area there is one Ice Flame and a series of unlit torches. You need to freeze all of the torches in turn, thus creating a path across the lake at the same time. Finish the path to the stairs and go up.

Another bell. Ignore it for now and go south. In this room you need to melt as much snow as possible. This reveals the order in which you must strike the bells to open the next area.

Leave the room. Push the bell in this order now.

Push it into the water. Freeze as much water as possible using the Ice Flames near the door across the water. Push the bell right. Freeze a path to the floor switch and stand on the switch. This opens the door. Cross back to the bell. Push it to the right. Draw a path from one of the Ice Flames to the unlit torch here. This will freeze the torch. Use it to freeze the other torch on the right, which will create a chest on the other side of the door. To the left, freeze all of the water. Push the bell in this order.

The bell falls into the slot. Strike the bells with the Boomerang in the above order. The door to the north will open. Go through the door, and open the chest for 20 Rupees. Go up the stairs.

Go south, east and north. Check the picture on the wall. Record this on the pale square to the top-left of the map. Go there. Send the Boomerang through the fire torch first, then through these torches.

Go straight east. A pack of White Wolfos appear. Kill them. Go through the blue door. Go south and stand on the floor switch. This creates a bridge. Equip the Whirlwind and blow the Boss Key across the abyss. Grab it and carry it to the Boss Door. Throw it in to open the door. Go up the stairs. Go north and check the sign. Save your game on the Menu and continue up the stairs. 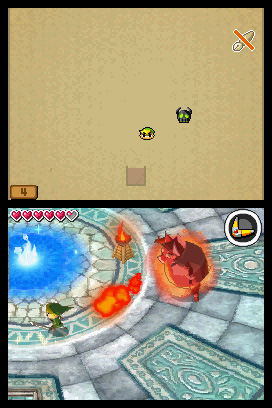 When Fraaz inhales fire, strike back with ice.

Two torches, one of fire and one of ice, will light up. A bubble will come out of each and merge to form Fraaz, the Master of Icy Fire. Frazz has control over fire and ice, a dangerous duo of power. He will inflate and change to a certain element, indicating which attack he is about to shoot off. You need to send the Boomerang through the torch of the opposite element, then towards Fraaz. He will lose his power and deflate. This allows you to attack him until he swipes you away.

Continue until he splits up into two smaller Fraazes. Watch the map. This shows which is which; one is fire, one is ice. Use the boomerang as before, sending it through one of the torches then towards the enemy of the opposite element, and then doing the same to the other. They will merge back into Fraaz, but the monster has a clever thought and destroys the torches. Wait for him to inflate fully, then avoid his attack. Fire is shot off in a series of blasts that land across the room, while ice impacts into the floor and creates a frozen crater. Send the Boomerang through the centre of this attack towards Fraaz and repeat it until he is deflated. As he gets weaker, Frazz bloats up further, which can make it harder to deflate him Attack him and repeat this process until he splits up again. Similarly, avoid their attacks and throw the boomerang through one of the attacks, then through the enemy of the opposite colour, as indicated on the map. They will merge again. Repeat the process with Fraaz like before until he is defeated. For the last time, you need to avoid two of his attacks before you can strike him with your boomerang. Finally, with enough effort, you'll defeat him. Frazz will take his last breath and explode into the silver Snow Force Gem.

A pedestal will rise from the ground, and the Snow Force Gem will come to rest on it. It will start to glow, and its energy will travel along the Spirit Tracks to the Tower of Spirits. The energy pulls down the next section of the Tower. A large chest will appear. Open it for a Heart Container. Step into the blue portal to return to the Spirit Train. More tracks have lead to the Tower of Spirits, and the fog is gone. Time to return to Anjean at the Tower.