The Legend of Zelda: Spirit Tracks/Controls

The majority of the actions are performed by using the

Walk/Run: To make Link walk, touch and hold the touchscreen, and Link will walk straight towards the area you are touching. The closer to the edge of the screen you are, the faster he runs. Link will automatically jump small gaps.

Roll: Tap the screen twice in quick succession to make Link roll forwards. This is quicker than running, but doing it too much will make Link dizzy (he can't move for a few seconds).

Talk/Examine: Touch a nearby object or person, and Link will interact with the object, such as talking to a person, reading a sign etc.

Pick up and carry/throw: Touch an object, such as a pot or rock, to pick it up and carry it. Touch an area to throw it at that area.

Push and pull blocks: Touch a large block to grab it, then touch the arrow facing the direction in which you want to move it.

Lock-on Slash: The most basic attack; touch an enemy, and Link will swing his sword at it.

Slide Slash: Slide the stylus in the direction you want to attack, and Link will slash the sword in that direction.

Spin Attack: The most powerful attack. Draw a circle around Link, and he will swing his sword in a large circle around him. Repeating this too many times will make Link dizzy.

There are two hidden sword skills that can be unlocked in this game through side-quests.

Sword Beam: First seen in the original The Legend of Zelda, perform a basic Slide Slash, and Link's sword will fire a beam across the screen. Despite requiring full health, it's the weakest sword attack in the game, but is useful for fighting enemies you don't want to get too close to. Obtained by capturing all 50 rabbits in the overworld, and bringing them to the guy at Rabbitland Rescue/Rabbit Haven.

Great Spin Attack: A super-strong version of the Spin Attack. Performed by doing three Spin Attacks in quick succession. Link will perform several Spin Attacks, but be left very dizzy. Doesn't require full health, but is only useful for boss battles. Obtained by finding all 20 stamps in the various dungeons and stations, thus completing Niko's stamp book, and showing them to him. 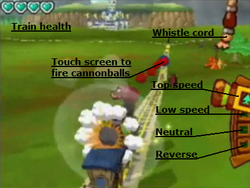 To board the train, talk to Zelda at a station. Once on the train, you can use the map on the touchscreen to trace a route to your destination. Touch and slide

along the screen to look around. Make sure to keep a look-out for enemies.

While moving, you can use the lever on the right to adjust the speed of the train. The lever has four positions, which from top to bottom are: top speed, low speed, neutral, and reverse. Reverse can also be used as an emergency brake while the train is moving forward.

The cord in the top-right corner is the Whistle, and can be used to scare away some enemies, such as Moinks, or to call down Beedle's hot-air balloon. The Railroad Switch appears at junctions, and is used to choose which route to take. Your drawn route will automatically change the Railroad Switch at junctions, but you can override it yourself while travelling.

After the first Temple, Alfonzo will ask to be taken back to Outset/Aboda Village. Once there, he will give you the Cannon. This is used to attack enemies who cannot be scared away by the Whistle. To attack, touch the enemy, and a cannonball will be fired at them.

In the Tower of Spirits, Zelda's spirit can possess a Phantom, once all three Tears of Light have been gathered, and the Phantom has been struck in the back. The Phantom will generally follow Link. But, by touching the blue circle at its feet, you can draw a separate path for it to follow. Direct it towards enemies or switches to strike them, or towards other Phantoms to distract them and allow Link to sneak by unnoticed. Touch the Call icon to call the Phantom, and have it return to Link's side.